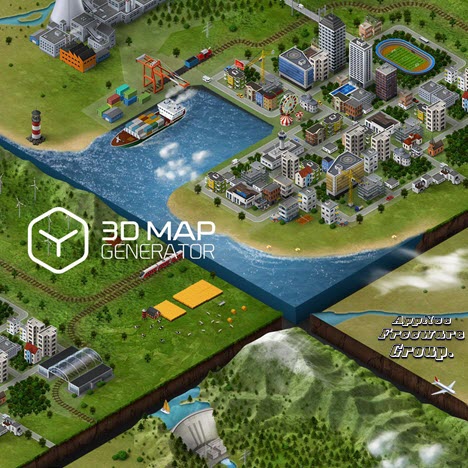 3D Map Generator Pro is a popular cartoon-style and three-dimensional maps generation presets (serves as plugin/actions set) for Adobe Photoshop. 3D Map Generator 2 – Isometric made brand-new developments on the basis of 3D Map Generator Pro. It allows you to determine the size of 3D maps on your own. Apart from isometric orientations for 3D maps offering new possibilities in usage and design, it also comes with new surfaces, layer structures, ground & background effects and a Top-Layer-Designer (which enables you to design/redesign maps in an more flexible and more detailed way, whenever necessary).

Unlike 3D Map Generator 2 – Isometric, 3D Map Generator – GEO is especially made for illustrating complex geographical 3D maps, which can be used to create big 3D maps in smaller map scales. Just with a few mouse clicks, you can use the basic shapes (such as text layers, vector shapes, Smart Objects, one of 54 vector country shapes) to generate isometric 3D maps in 3 different orientations along with heights & depths in the terrain. The generated 3D maps can be edited and redesigned as need at any time. And, it is possible to use the inbuilt or your own textures, brushes, effects, icons or other elements in 3D Map Generator – GEO.