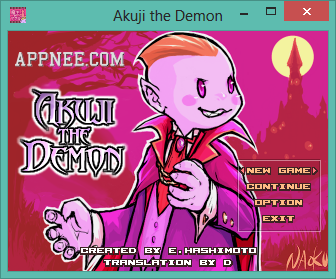 Akuji The Demon (??????) is a classic side-scrolling small indie game from Japan, whose pixel and lovely styles are very similar to the “Cave Story“. In many similar games, players are always playing the hero, but in Akuji The Demon you will be a big villain.

The features of Akuji The Demon lie in its character’s gradual skill system, which starts from only jog and jete. After finding the crystal balls distributed in the maze, you can acquire new skills, such as attack, running and so on. Generally speaking, the game operation sense is very strong, which needs players have certain skills. The difficulty is just step by step, easy at the beginning and becomes more and more challenging. Besides, the game supports gamepad operation.

The locked door in the beginning of the game is opened by attaining a S rank/SS rank. Rank is determined by the the time it takes to clear the game and the amount of Mana recovered.

This is the Akuji The Demon v1.01 Final Portable Full version, working for Windows XP+.