Microsoft Visual Studio (VS for short) consists of a series of development kit products produced by Microsoft (written in C++ and C#), and is currently the most popular IDE (integrated development environment) for developing applications on Windows platform. As of writing this post, its latest release is Visual Studio 2019, based on Microsoft .NET Framework 4.7.

In 1998, Microsoft released Visual Studio 6.0. Meanwhile, the versions of development environment for all programming languages were increased to 6.0 too. Plus, this is also the last release of Visual Basic. Because since its next version (7.0), Microsoft Visual Basic had evolved into a new, object-oriented language: Visual Basic .NET (VB.NET for short, first launched in 2002). At the same time, because Microsoft was sued by Sun company due to the fact that Microsoft extended Sun’s Java language and caused it to be incompatible with Sun’s Java virtual machine, Microsoft no longer included the development environment for the Java virtual machine in the subsequent releases of Visual Studio.

In 2002, with the raise of .NET slogan and the releases of Windows XP and Office XP, Microsoft released Visual Studio .NET (whose internal version is 7.0). In this version of Visual Studio, Microsoft sold Visual FoxPro as a separate development environment and eliminated Visual InterDev. At the same time, Microsoft introduced a code hosting mechanism built on the .NET framework (version 1.0) and a new programming language C# (pronounced C Sharp). C# is a modern language based on the most powerful two languages C++ and Java, also the language used for writing the entire .NET framework.

.NET’s Common Language Runtime (CLR) mechanism was designed to support the components developed in different languages within the same project. All CLR supported code will be interpreted as machine code executable for CLR and then run. Visual Basic and Visual C++ were extended to a development environment that supports managed code mechanism; Visual Basic .NET thoroughly remade itself based on Visual Basic, and started to completely support the object-oriented programming mechanism. And Visual J++ changed to Visual J#. The latter only has the same syntax as Java, but not for the Java virtual machine any more, for the .NET Framework instead. 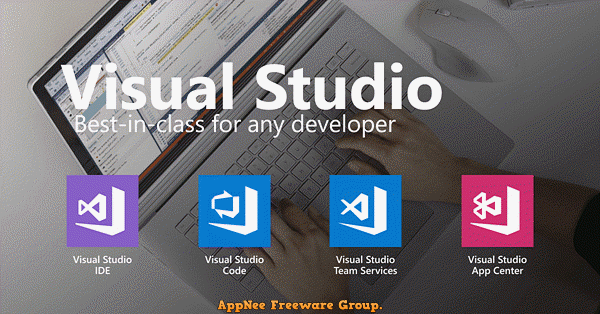