Atom comes with abundant functions, simple and intuitive GUI, comprehensive programming languages support, built-in file manager and very high configurability. Moreover, it also supports macros, the function of automatically splitting screen, perfect combination with GIT (all changes to the code or text reflect on the editor interface, which is very convenient for GIT users), and provides the package management feature similar to the popular Sublime Text. Plus, it supports plug-in extension ability, as well as the code completion function (also called Snippets) that can greatly improve the efficiency of programming. 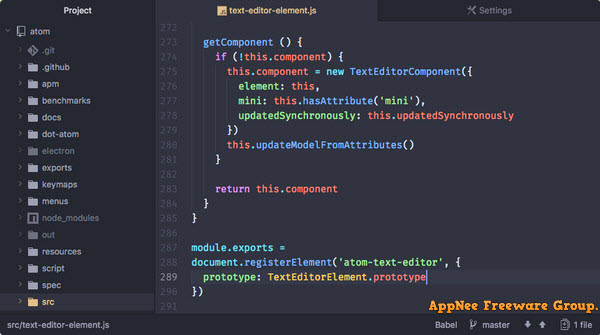 We can simply think of Atom as being built based on the NW.js Web technology (previously known as node-webkit, and equivalent to Chromium + Node.js) – that’s a web page running locally, which also represents a new direction for WEB technology to access to the desktop application development field. For example, developers can use JavaScript to write plug-ins, and uses CSS to customized the UI theme to any style you like, etc., which make the threshold of writing plugins, themes, as well as the secondary development reduce a lot.

Atom, by contrast, is more outstanding than the time-honored Vim and GNU Emacs, as well as the currently popular SublimeText. Needless to mention UltraEdit / EditPlus / (G) Vim / GEdit / NotePad++ / TextMate / ProgrammerPad / Visual Studio Code or any other similar text/code editors. In the end, AppNee wants to tell every programmer – our using habits will determine all the final choices. That is to say, once you are used to use some text or code editor to work daily, it won’t be that easy to change to use others later!