Sometimes we want to merge multiple scattered video clips into a big video file, for ease of storage, management or publish, share. In this case, we need a professional software to solve this problem. And in numerous video joiner/merger, Boilsoft Video Joiner (formerly called AVI/MPEG/RM/WMV Joiner) is my favorite one using all the time.

Boilsoft Video Joiner can easily join AVI, MPEG (MPG), VOB, RM (Real Media), Windows Media (ASF, WMV), 3GP, FLV, MP4 and many more formats of video files into a seamless single big one according to arbitrary order. It can be regarded as the most useful and popular one in video joining tools, and rarely mets some video file that can not be merged.

In particular, Boilsoft Video Joiner has a ultra-high speed of lossless video merging, and supports the Direct Stream Clone (direct join the same type of video files without an encoding process) and re-encode (applicable to merge any different formats of video files, but because of the video transcoding process, the merged video quality has loss) these two kinds of video merging modes, which enables you to join video files in an efficient and flexible way. BTW, similar powerful and popular tools like: Gilisoft Video Editor and Andy’s FLV Joiner are all good alternative choices. 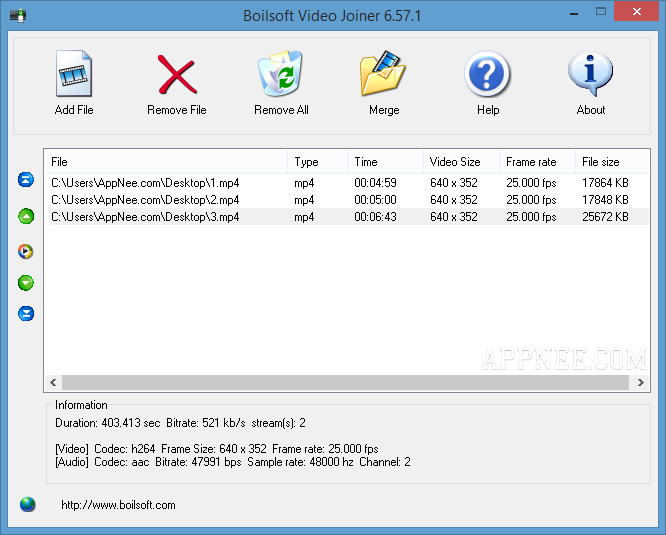