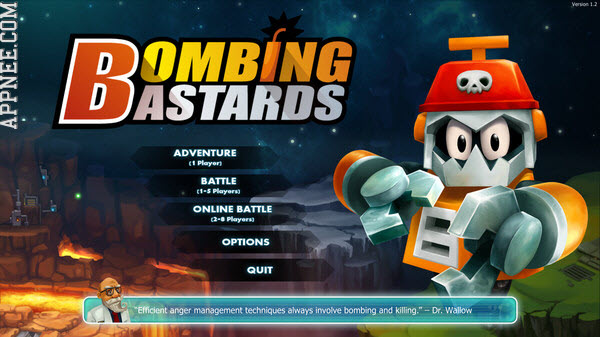 In the video game age, Bomberman is absolutely the outstanding work among the same type games. As a gamer, you must have played it on FC or Arcade platform. Now we can recall it in a brand-new form on PC- Bombing Bastards, a Bomberman style fancy puzzle game, produced and released by the Sanuk Games from France.

We can say that Bombing Bastards made the whole of Bomberman style games popular once more. Compared the classic works, Bombing Bastards has much richer game content and more challenging, difficult levels. Without numerous trying and the accumulation of experience, you are not able to clear the stages with one coin/life.

The gameplay is also similar with the classic Bomberman on FC or Arcade console, but Bombing Bastards has added quite a lot of new elements and design, which definitely will make players feel satisfactory. For example: brand-new and interesting maps, diverse bomb props, graphics beyond your imagination made by the new game engine, more real explosion effect, etc.

This is the Bombing Bastards v1.2.0 for PC Portable full registered version for Windows.