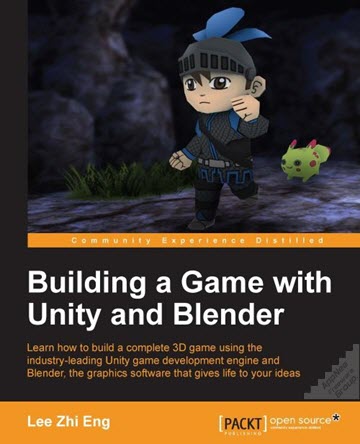 After comparing Sams Teach Yourself, Unity Game Development in 24 Hours and Building a Game with Unity and Blender these two books, I finally decided to select the latter as the successor to Unity’s official tutorial “TANKS!” and the first official ebook for me to formally and systematically learn Unity game development. The reason is simple: this book is very thin (with only 250 pages); there is only one game development case throughout the entire book, and the game is of type A-RGP that I urgently need to learn about.

In this book, we will learn most of the knowledge required to make a complete 3D game using the industry-leading Unity game development engine and the popular modeling software Blender. This includes: learn the basic functions of this powerful combination of game development tools, and put theoretical knowledge into practice; learn how to design and make all the core elements needed in a game – from characters, to environments, props, etc.; learn how to integrate artificial intelligence into game so as to make complex and highly entertaining game; and more.

In summary, Building a Game with Unity and Blender is primarily for pure beginners who have just started to learn how to create their own games from scratch using free tools available on the Internet. It also targets those guys who have had experience in developing games but have used some other expensive tools such like Autodesk Maya, Autodesk 3ds Max, and so on, and now want to use currently the best combination “Unity + Blender” instead.