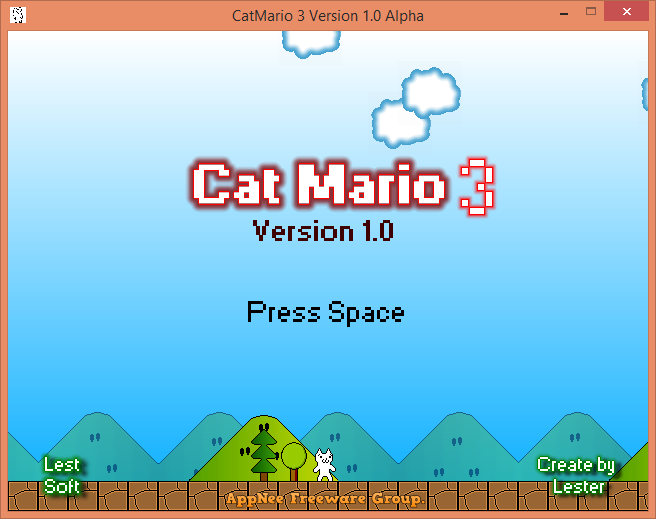 Cat Mario 3 is not a successor of the fan-made small indie game Super Mary Cat or Syobon Action (AKA: しょぼんのアクション) developed by Chiku from Japan in 2007, both of which were totally inspired from a Flash game – The Life-Ending Adventure (AKA: 人生オワタの大冒険, The Big Adventure of Owata’s Life). It was developed by Lester (Lest-Soft) in 2014, comes with better graphics. Yet they have the almost identical gameplay and game mode.

Of course, Cat Mario 3 inherits all the core features of Super Mary Cat and Syobon Action – extremely high difficulty and abnormal gameplay. In addition to better graphics, most of the BGM in game is taken from some classic video games, such like The Cheetahmen (overworld), Spelunker (underground), Ghosts ‘n Goblins (castle), Puyo Puyo (credits), even Super Mario Bros. 3.

In this unconventional game, keeping three key points in mind can help you succeed. First, be patient (in some cases, you have to wait for the enemy to walk away to avoid some obstacles). Second, you need to memorize the specifics of each encounter. Third, try not to get or touch anything appearing on the road as far as possible, and your only defense is to jump agilely (because everything you can see in this game can kill you without foreshadowing). In other words, you must guard against anything (both visible and invisible) in the game, such as mushrooms, gold stars, grounds, clouds, invisible blocks and drops, and a variety of unexpected pitfalls.