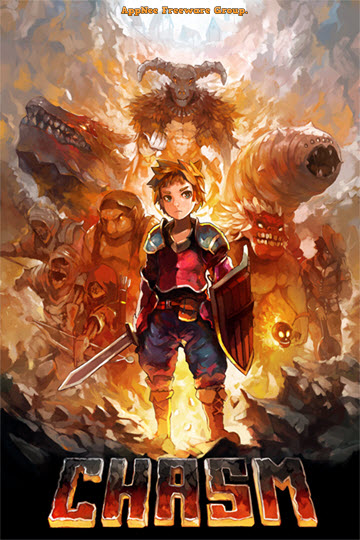 Chasm is a pixel-style 2D action, adventure and role-playing game, developed by Bit Kid in 2013, and finally released in 2018. It combines the popular elements of Castlevania, Diablo, Metroid, The Legend of Zelda these classic video games. For example, it has the RPG game mode of Castlevania: Symphony of the Night, map design of Metroid, random item dropping system of Diablo, etc.

Chasm’s creation is inspired by a few classic dungeon adventure & action video games (especially the level design of Metroid and Castlevania), but combines the action-clearance gaming experience with the joy of growing up by collecting props. Its vast 2D world is divided into six areas (whose explorable space is roughly six times the map size of Metroid), each of which is constructed with a phased random-generation technique. Since the map is too large, this game does not take the punishment of permanent death to player by default. But you can manually enable it in the difficult mode.

Overall, Chasm is a cute, fun Metroid- and Castlevania-style small game with lots of cool and new ideas, although none of them let the player feel too excited. Its splicing maps are very fun to explore and filled with well-crafted and vivid enemies for player to fight against. But the repetitive rooms and the world devoid of individuality generally undermine Chasm’s original ideal replayability. The final result of all this is – Chasm probably won’t make a player want to play it a second time.