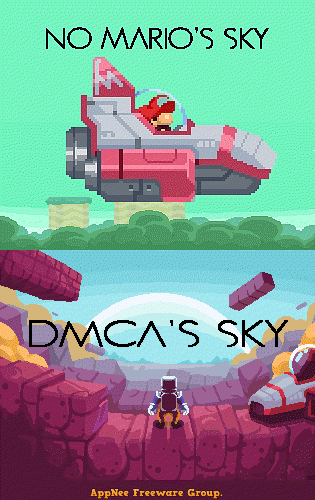 No Man’s Sky is a sandbox-based space exploration game, loved by gamers for its high degree of freedom and large map structure, but also received numerous bad reviews for its poor playability. In particular, the maps of galaxy and the scenes of planets in game are not preset, but randomly generated. Players need to explore, fight, trade and survive in this nearly infinite universe (containing 18,446,744,073,709,551,616 stars).

DMCA’s Sky (formerly called No Mario’s Sky = No Man’s Sky + Super Mario) is a Mario-like, open-world and cross-platform small indie game inspired by No Man’s Sky. It was originally created for the Australian Ludum Dare 36 in 72 hours by ASMB Games (from Australia) with Unity in 2016. It was released in the same year as No Man’s Sky, which is a rather ironic to the latter.

We can think of No Mario’s Sky as a Mario edition of No Man’s Sky. Although it took less than 72 hours to make, it not only keeps the classical gameplay mechanics of Super Mario Bros. series, but also has the exploration elements of No Man’s Sky, especially a large number of randomly generated planets to explore. Players can control Mario to adventure in this “infinite” universe, piloting a spaceship from one planet to another.

Unfortunately, No Mario’s Sky was later taken down after receiving a copyright complaint from Nintendo. So it had to change its name (as DMCA’s Sky) and replace all Nintendo associated game resources (audiovisual work, images, fictional character depictions, etc.). The good news is that Nintendo’s DMCA removal against No Mario’s Sky didn’t kill the game, instead it was re-released and made better that year, with all in-game elements and terms that directly referenced Super Mario replaced with non-copyrighted counterparts.