I myself have no idol in the human world, but in the nature world – there are life forms everywhere that let me envy too much, and ant is one of them. That’s why you can see some classic ants simulation games at AppNee. Such games are really few (especially Eric Tereshinski’s excellent first-person perspective of Ant Simulator had unfortunately been cancelled), and Empires of the Undergrowth is currently the latest, also the most well-crafted one. Slowly, of course, all the outstanding ant-themed games will appear in AppNee.

Empires of the Undergrowth is an unusual, fast-paced real-time strategy (RTS) type of ants simulation game, developed by Slug Disco game studio from United Kingdom. This game was inspired by SimAnt, a classic PC game launched by Maxis in the 1990s. But unlike the cartoon style of the 3D ant simulation game Empire of the Ants published in 2001, Empires of the Undergrowth looks pretty realistic. The gaming happens on the ground and underground at the same time, shows the ants life from a documentary perspective, and challenges the player’s strategy gaming ability extremely.

Empires of the Undergrowth comes with unique gameplay, vivid and exquisite graphics, takes the bird’s-eye view, and keeps the management of ant colony as the central task of this game. Players need to manipulate the huge army of ants to dig nests and tunnels, store food, breed offspring, seize territory, build and expand the ants’ underground kingdom, and control your ant colony to wipe out other ant colonies. Moreover, you also have to fight with other different races of insect enemies or tribes (such as spiders, cockroaches, etc.). At the same time, you must take good care of the most important member of the entire ants empire underground – queen ant. 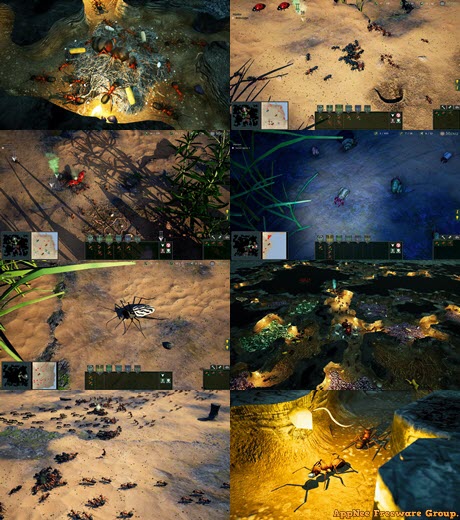