Freedom Fighters and earlier versions of Hitman series are similar in terms of picture style, as the two were created by the same well-known game production group IO Interactive. The intention that EA originally hired IO Interactive to lead the development of Freedom Fighters is obvious – EA hoped to have one place in the TPS (3rd-person shooting) game market. This showed that EA’s ambition to become a global gaming powerhouse was evident.

Freedom Fighters comes with gorgeous and vivid pictures, delicate and lively scenes, as well as breathtaking and exciting missions. The game is full of challenges to player’s intelligence and reflex, and combines the depth of team cooperation games with the tension of action & war games. The protagonist can make a risk alone or lead his teammates to charge forward. In addition, players can assign team members to execute different commands at different locations on the map. Therefore, this game also has a bit touch of the Real-Time Strategy type of games. 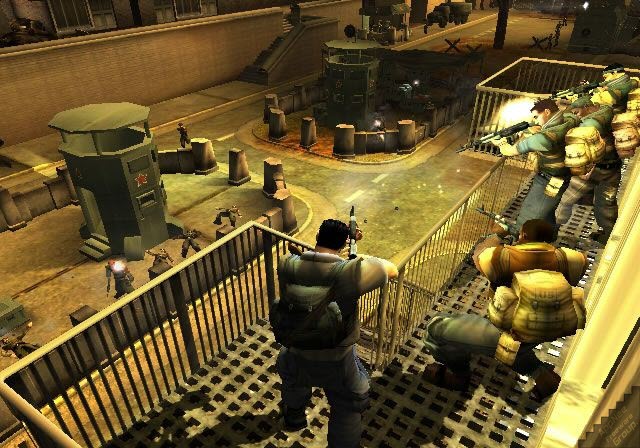 Freedom Fighters has a glam-based recruitment system. It rewards players with points for recruiting freedom fighters or capturing important strongholds, which enable player to recruit more members. In addition, the decisions player makes will affect the mood of other fighters. There are seven big levels in this game, most of which have several small levels, and the scenes of small levels can be switched in the sewer.

In addition, each level has more than one objective. In addition to the flag raising mission, all other missions are optional. If you ignore them and finish the flag-raising task, the current level ends immediately, thus you are unable to complete other tasks. Hence, for players who want to move from scene to scene to replenish their equipment, the flag-raising task needs to be done in the end. After clearing the game once, the restrictions of all levels will be removed, and players can freely choose from seven major levels to carry out missions.