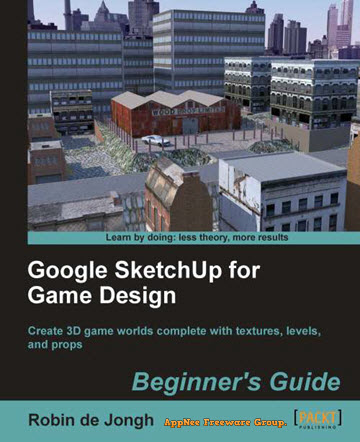 Google SketchUp is an extremely popular and user-friendly 3D modeling tool, which is production process of design scheme oriented, and mainly used in the architectural design and relevant fields. Its creation process not only can directly express the designer’s idea, also fully meet the needs of communicating with customers in time. Applying it to game design is a relatively new field with a certain amount of challenges.

As its name suggests, Google SketchUp for Game Design is a beginner’s guide handbook (only 270 pages) on game design with Google SketchUp. It will teach you how to use SketchUp this simple 3D modeling tool to build realistic 3D worlds with complete textures (including realistic terrains, buildings, vehicles and other objects), levels and props for games, visualization or films. After that, you can export them and then import them to many popular game engines (such as Unity, CRYENGINE, OGRE, Panda3D, Unreal Engine, and Blender Game Engine) for further game development.

Google SketchUp for Game Design uses a clear and step-by-step way to build a complete 3D game with Google’s SketchUp. One side, it’s specially written for beginners who would like to create an entire 3D game world with the most popular free game engines. On the other side, it is also suitable for all users who want to create levels and assets and sell them in many game assets stores. Or, they can also build all kinds of realistic 3D objects or environments and use them in visualization or animation projects.