Half-Open Limit Fix (short for HOLF) is free and effective patch from Russia specially designed for removing the maximum connection limitation of TCP/IP half-open. In consequence, it will effectively improve the concurrence ability of network packets (sending, receiving), and accelerate the transfer speed of multiple packets or small packet (to a certain extent, reduce the network delay).

Half-open limit fix is the most mature one in technology, and much safer to use – because it direct effects on the tcpip.sys system file to increase the number of maximum connections. Anyway, I guess a lot of users are still using the early Windows (especially Windows XP), so Half-open limit fix still has its place! 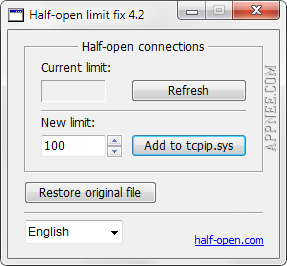 *** For Windows 7 SP1 and higher OS, this patch is not required at all, because these Windows versions have no limit of half-open connections quantity any more.

This is the Half-Open Limit Fix v4.2 Final portable version.