IntelliJ IDEA is an award-winning Java and Groovy programming languages integrated development environment, as one of products of JetBrains company from Czech Republic, whose most developers are from eastern Europe noted for their preciseness.

IntelliJ IDEA is recognized as one of the best Java development tools in the industry more than a decade. Especially its intelligent code assistant, automatic code prompt, reconstruction, J2EE support, Ant, JUnit and CVS integration, code review, innovative GUI design and many other features can be said to be supernormal. Similarly, IntelliJ IDEA is also considered to be the current most efficient Java development IDE. It integrates so many practical functions in the development process, you can almost easily finish whatever you want to do without one mouse click, which undoubtedly will improve the development speed in greatest degree. In short, the simple and powerful of IntelliJ IDEA make it have sharp contrast to other cumbersome and complex IDE tools (including the famous Eclipse).

Of course, no matter how to praise her, that is just the others’ experience, if you really want to know her, the only way is to experience by yourself. In a word, the evaluation to IntelliJ IDEA from AppNee is a word: with IntelliJ IDEA, you can write better code, be more productive and start up in no time. 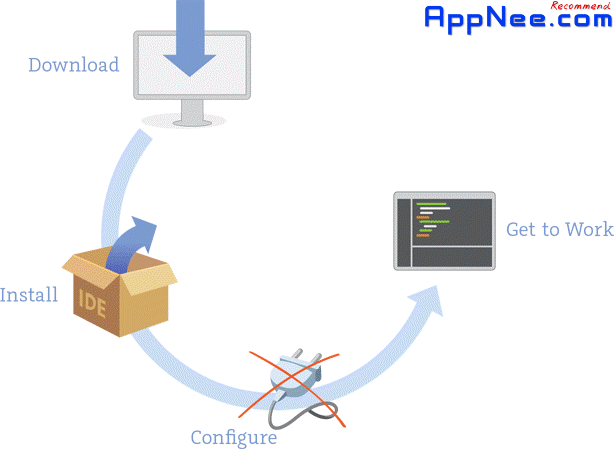 Take Google’s Android Studio for example, as a new Android development environment based on IntelliJ IDEA, it provides new features and improvements over Eclipse ADT and has been determined to be the official Google Android IDE.

The following table lists some key differences between Android Studio Beta and Eclipse with ADT.

This is the IntelliJ IDEA Community Edition – free open-source version of IntelliJ IDEA, a premier IDE for Java, Groovy, Scala and other programming languages.