Jackie Chan: Stuntmaster (AKA: Jackie Chan’s Stuntmaster) is a very classic beat ’em up type of action video game on PlayStation platform, and was developed by Radical Entertainment from Canada in 2000. It features the internationally famous action movie star Jackie Chan, and is the only 3D action game featuring Jackie Chan.

It now appears that the picture of this game has been quite simple and rough, but its gameplay and playability are still very high. Not only can the player use the unique kung fu skills of Jackie Chan, but the ubiquitous items can also be used to attack enemies or be destroyed for fun, which undoubtedly increases the fun of the entire game. The action design in this game is pretty rich and fun, allowing players to experience the special effects of Jackie Chan’s movies. In addition to the basic actions, players can also do a variety of combos, and even “drunken boxing“.

In the production process, the game not only uses the appearance and characteristics of Jackie Chan, but also utilizes the “motion capture” technology to bring Jackie Chan’s real actions into the game. In view of the characteristics of Jackie Chan’s films, Jackie Chan Stuntmaster introduces elements from the movies into the game, thus recreating Jackie Chan’s agile skills and scenes with unbloody violence in the film. In addition, once the player has finished the game (they have to collect all 20 golden dragon heads), he will be able to see the interesting sidelights when making this game in the final Bonus episode. 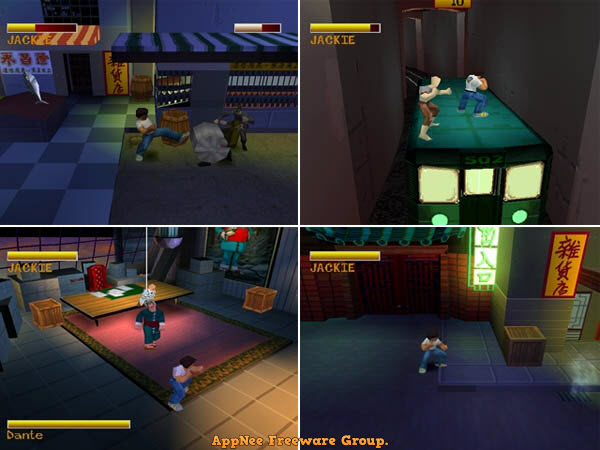