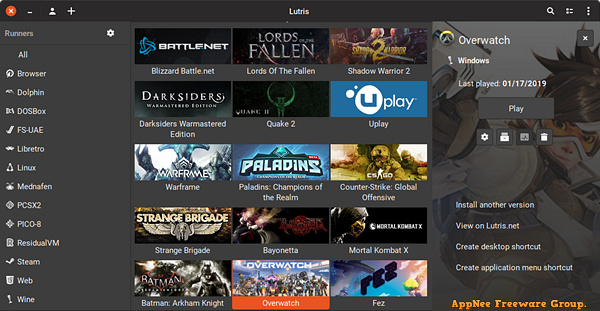 If you use Linux and like to play computer and video games, then running games on Linux is always a challenge to you. In addition, one of the embarrassments that Linux users have felt for years about having too many games is how do you manage them all? At this point, try Lutris, which manages your entire games library and provides the best settings for each game, so as to make running games on Linux easier and more efficient.

Lutris is a free, open-source, multi-game platform management tool specially made for Linux. Like Steam, it consists of two parts: web page and desktop client. On the website you can browse and bookmark your favorite games, and on the client you can install, delete, configure, launch and manage your favorite games from any source. Its goal is to support managing and running games for all platforms within a single application on Linux, including Linux native games, Windows games, console games, Web browser games, and games from game stores like Steam, GOG, Epic, Battle.net, Origin, Uplay (now Ubisoft Connect).

Lutris supports a variety of game systems (already comes with dozens of video game emulators) and almost all the latest Linux distributions, and uses installation scripts written by community members to make the installation process of games much easier. Even better, Lutris uses custom version of Wine optimized for games developed specifically for Windows to ensure a smooth gaming experience. In short, with help of Lutris, playing games on Linux is getting easier and more comfortable.

Anyway, with Lutris in hand, whatever form a game takes, as long as it’s on your computer, then you can add it to Lutris. In other words, when you want to play any game on Linux, you don’t need to remember whether the game was installed in /usr/games, ~/Games, ~/GOG Games, your apps menu; or it only exists in the web browser’s favorites, it’s on Steam; or it needs to be launched in an console emulator… Instead, all your games are in one place now: your Lutris.