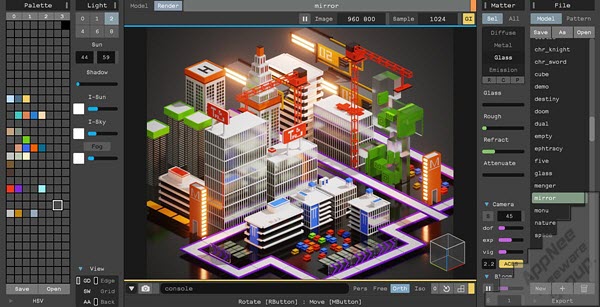 Voxel (short for voluempixel) refers to the smallest unit of the world that is made up of objects rendered in three dimensions, which can be cube, sphere, cylinder and many other basic geometries, as well as the iteration forms of complex geometry. When it comes to voxel games, the representative work is of course the well-known sandbox game Minecraft, in which the entire game world was created using voxels.

MagicaVoxel is a completely free and lightweight (less than 2 MB) voxel editing tool (including both modeling and rendering capabilities) for Windows and Mac platforms, developed by Ruiwei Bu from China. Its charm lies in the streamlined user interface, foolproof operations (just like sculpturing a model), built-in pithy and fast rendering engine (rendering effect is extremely excellent).

After a simple setup, MagicaVoxel can simulate materials, render various effects, including the elimination of watermark, shadows customization, etc. In addition to outputting the final work as PNG image, it also allows to export it as 3D models for other modeling software to further use. This can be very convenient for advanced CG users to make a first draft for their models.

If just using the voxel to create things, Minecraft this game can satisfy you enough. But if you want the traditional 3D modeling workflow to be as simple as building blocks, then you have to try MagicaVoxel. In MagicaVoxel, what can restrict you is only your imagination! In fact, MagicaVoxel has been regarded as the preferred voxel authoring tool, and many voxel enthusiasts around the world have used it to create their own voxel models for a long time.