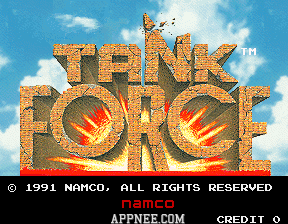 Tank Force (ANA: タンクフォース) is the sequel of famous and classic Battle City shooter video game, released by Namco in 1991. For any video game fan, I believe you must have played Battle City on FC platform, which was quite a hot and popular game at that time.

This arcade edition of Tank Force brought more beautiful graphics, upgraded props and novel gameplay. The most obvious change is that players can destroy their own fortress before but can’t do that now, only the enemy can.

In addition, the game difficulty also has a certain degree of increment, especially joined different kinds of new enemy tanks as well as the BOSS tanks making it harder to defend. Last of all, I believe Tank Force will bring you a brand new game experience.