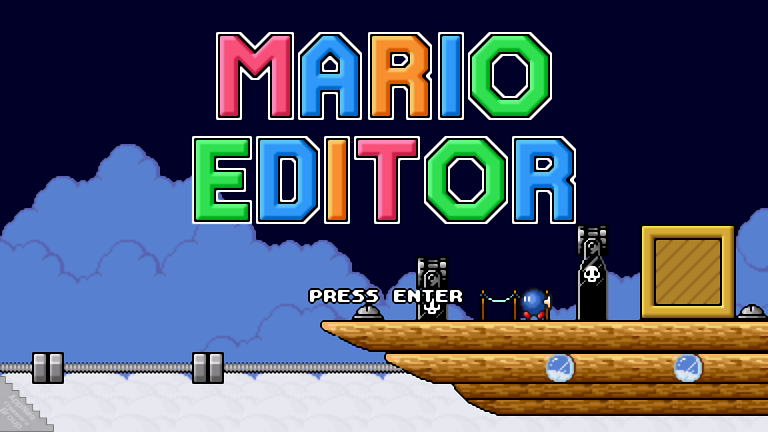 Mario Editor is the latest, free Mario game platformer/level editor created by Hello Fangaming in 2016, using the GameMaker: Studio game engine. Meanwhile, it’s also the successor of the Super Mario Bros: Game Master, and serves as the celebration of the 10th anniversary of the famous and popular open-source project: Hello Mario Engine.

As a Super Mario Maker-like level builder, Mario Editor is very flexible, user-friendly and fully-featured, and comes with a massive selection of blocks, sceneries, power-ups, enemies, items, and other goodies (such as the comprehensive yet interesting tutorial level that teaches beginners how to start with its various features) for your level creation. In other words, it almost provides anything for creating a full Mario game that Super Mario Maker can. Or, we can regard it as the PC edition of Super Mario Maker with more options. With its help, you can easily create your very own Mario levels with just mouse clicks within minutes, and share them with any other Mario game funs around the world.

Compared with Super Mario Bros: Game Master, in order to bring all the focus onto the levels building itself, Mario Editor removed some functions like: capability of creating world maps and standalone games. Instead, it started to use a newer version of Hello Mario Engine, and introduced loads of new features such as: support of adding multiple sections to each level; a more advanced warp system; an improved, easier-to-use user interface; a new challenge mode that lets players play a set amount of random levels with a set number of lives; tile fill tool; multi-tile select; capability of using modifiers on bricks; and more.

Of course, the most powerful and professional Mario level editor is still the famous Super Mario Maker developed by Nintendo. However, for us fans game makers or creators, it is always a good choice to first try to use a capable and vigorous, efficient tool like Mario Editor to realize our own Mario game design ideas in our imagination.