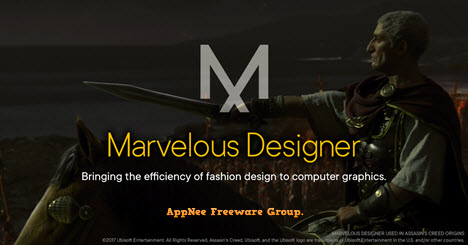 Marvelous Designer supports importing 3D models generated by other software, simulating clothes and fabrics on the model in real time, and exporting clothing data for other use. It’s able to make complicated one-piece dress and business attire with various decorative patterns, even the buttons, folds and physical properties of accessories can be shined through well too. In a word, Marvelous Designer can clone the texture and physical characteristics of almost any types of fabrics. For games and animations producer, using Marvelous Designer for clothes and fabrics creation can save them a lot of working time while improving the quality of works, so as to put more time and energy on the creation of character itself.

Marvelous Designer has been widely used in the field of film & television production and games design. For example, Weta Digital company used it for making The Hobbit, and case is the same for The Kennedy/Marshall Company‘s The Adventures of Tintin. As to game works, EA, Ubisoft, Disney, ILM, Blur Studio and so on computer game or animation companies are the customers of Marvelous Designer too. In addition, it works even better in terms of creating works for home games consoles. *** If it fails (ends up with account login screen every time it launches), you have to block Marvelous Designer by using a firewall (for both incoming and outgoing calls), or adding the following line to your hosts file instead: