Mednafen is driven by command-line, utilizes OpenGL and SDL, has the ability to remap hotkey functions and virtual system inputs to a keyboard, a joystick, or both simultaneously, supports saving states and real-time game rewinding, allows to take screen snapshots with one key, and can record audiovisual movies in the QuickTime file format, with several different lossless codecs supported.

Mednafen is essentially a software wrapper that bundles various original and third-party emulation cores into a single package, and driven by command-line input. Although many of its cores are ports from other emulators, some of them are also original. Its Sony PlayStation, Sega Saturn, Nintendo Virtual Boy, and NEC PC Engine (TurboGrafx-16) original cores are notable for their high quality, compatibility and accuracy. In fact, some emulation cores of Mednafen have been ported to RetroArch/Libretro.

Mednafen is also one of the most powerful game emulators for Linux, with excellent emulation and performance (very low CPU usage) that far outperforms other emulators on Linux platform. Except the absence of a graphical front end, it is the most perfect solution for GBA, FC and many other emulators under Linux. It takes very few system resources, supports both OpenGL and SDL acceleration methods, and allows user to set buttons in the game at will, unlike many emulators that have to set them in the configuration beforehand. 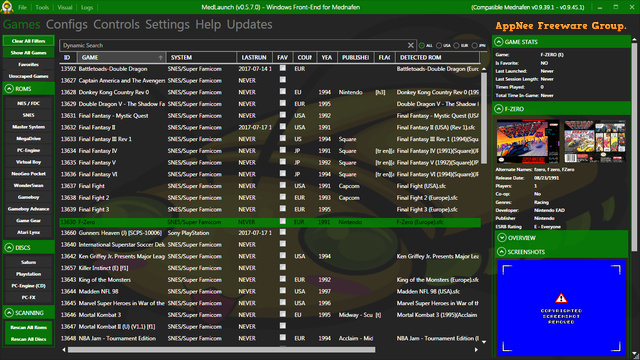