Microsoft Flight Simulator is one of Microsoft’s early products, also one of its oldest projects, which is even three years older than Windows operating system. As the most popular and top-notch flight simulation game series, it enables players to fly in an incredibly realistic world with highly sophisticated aircrafts of all kinds. So, in this game, you can make your flight plans, and fly anywhere on earth.

Microsoft Flight Simulator has reached the pinnacle of the same type of games in terms of graphics and degree of realistic. Players can enjoy the almost completely real flying experience (including day and night flights), and face a variety of realistic and challenging weather and environmental conditions. They can fly in a wide variety of aircrafts (including seaplanes) in the extremely spectacular and realistic sky, and even enjoy the beautiful skyscape with anyone from around the world via the built-in networking system . 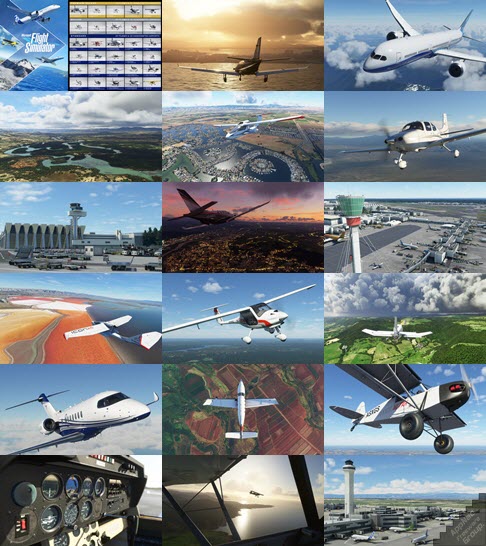 Fourteen years later, Microsoft Flight Simulator was finally here. This work employs a lot of high-tech elements, its intention is to restore the most “real” flight experience for fans of flying games. In addition, the use of ray-tracing technology adds a deeper sense of realism to an already super-realistic simulation game. What’s more, it makes clever use of the random generation technology based on the real-time Bing satellite images, which means that every place, every airport and even some small temporary runways in the wild you see in game are almost exactly the same as the real places in life. Trees and various buildings are modeled and rendered in real time and placed in their corresponding locations in reality. There are also randomly generated vehicles on the road.

Now that Microsoft Flight Simulator pulls data directly from Bing satellite images in real time, this means you can visit anywhere on earth in the game. In fact, most of the players’ favorite thing to do in this game is to fly around and see the sights. Players can take off and land from more than 40,000 airports around the world. In addition, using the real-time data from the Bing engine not only means that everything looks the same as the real thing, but also it makes the weather system in game completely dynamic. Weather data linked to the real world in real time means you can encounter and experience any weather situation at any time. For example, if a typhoon is blowing somewhere in reality, you can immediately start Microsoft Flight Simulator to try flying a plane in the stormy weather.

At its core, Microsoft Flight Simulator isn’t exactly a game, but rather an accurate simulator of our real world. For example, the cockpit of an airplane was modeled almost entirely through 3D scanning; Some planes even got AutoCAD design files from their manufacturers; There are even dedicated teams to record the actual cockpit sounds of different planes to create more and better immersive experiences.

Many people may use online maps to revisit places they’ve been to before, or to explore places they haven’t been to. With this game, you can visit places around the world that we’ve never been to, hone your skills in flying different planes, and most importantly, experience the joy of flying from the comfort of your own home. If there are places you can’t see with your own eyes in real life, then you can experience the almost real scenes in this game. BTW, this game will be added with helicopters in the future, whose main purpose is to facilitate people to take a good look at the breathtaking sceneries around the world.