When you first launched Minetest, didn’t you think it was just Minecraft? Actually not. Although their interface, style, and gameplay are almost the same, Minetest is essentially a free, open-source and cross-platform voxel game engine (written in C++ and Lua, using the Irrlicht Engine). It was created by Perttu Ahola and first released in 2010, and is now developed by a team of volunteers, with significant contributions from the community. It’s available for Linux-based systems, FreeBSD, Windows, Mac, and Android platforms, and provides an API for users to create their own games and mods written in Lua.

Minetest is not just a standalone sandbox building game, but a handy and friendly game development tool. Of course, for the common users, you can simply think of it as an alternative/clone to Minecraft with a more open and free world. In Minetest, you can play one of their many games, mod a game to your liking, make your own game, or play on a multiplayer server.

Minetest is very similar to Minecraft. The common and greatest features of both are open game world and very high degree of freedom. The game allows players to explore the world and use their imagination and creativity to build anything they want. But because Minetest is open-source, it has more freedom than Minecraft, so that players/developers can come up with wild ideas at the source level. In addition, Minetest supports developing mods using the Lua scripts, and can be extended with additional modules to add more options.

There’s no doubt that Minetest was inspired by Minecraft, and currently many of its users have been copying the gaming experience of Minecraft in many ways. Thankfully, Minetest has positioned itself as a free, open-source 3D voxel game engine, which is very suitable and potential. That is, it was intended to be a voxel game engine rather than just a clone that could replace Minecraft. After all, as a game, Minecraft has grown to the point where it is irreplaceable. For example, in Minetest, you can implement some game modes that are impossible or expensive to implement in Minecraft. 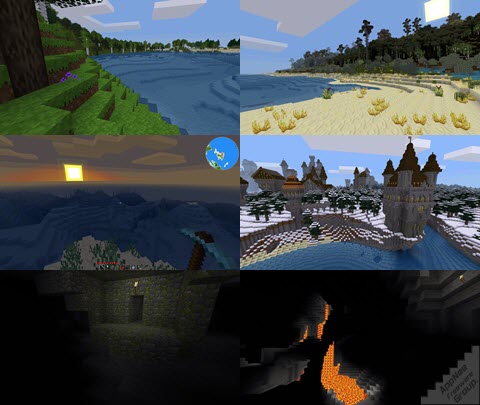 *** All controls are re-bindable using settings. Some can be changed in the key config dialog in the settings tab.