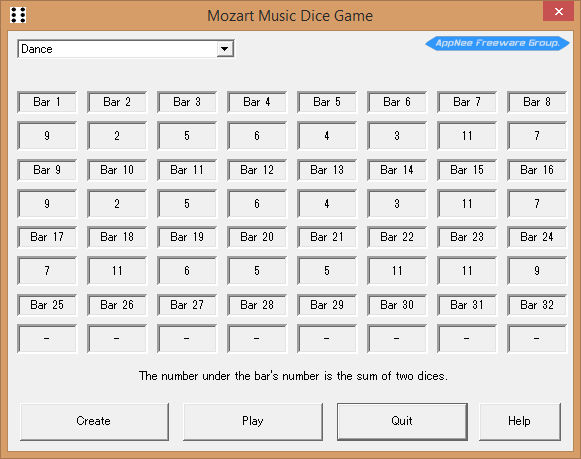 Mozart Music Dice Game is an interesting, enlightening aleatoric music (AKA: aleatory music or chance music) generator – based on Wolfgang Amadeus Mozart‘s musical dice game theory. Although the structure of this small app is simple, the idea it expresses about the philosophical essence of aleatoric music in the 20th century is clear and profound.

Since John Cage created the Music of Changes according to the way of making divination by flipping a coin exists in a Chinese ancient book called I Ching in 1951, the Musikalisches Würfelspiel, K.516f created by Mozart in 1787 has been often mentioned together, as two important works for discussing aleatoric music. They are both considered to come down in one continuous line with the chance music theory in the 20th century. Because they have the incidental behavior of shooting a dice (or throwing a coin) in the process of creating music, although you will find that there are many other different places between them if you further study these two works.

I myself didn’t see Mozart Music Dice Game as just a simple and small game. Instead, this application happens to match my little insight to music creation for a long time: The creation of music is a kind of art that can be combined with physics, chemistry and so on any natural science (especially maths). For example, converting the results of periodical changes of a ting in physical or chemical aspect into electrical signals, and then output them as a piece of score. 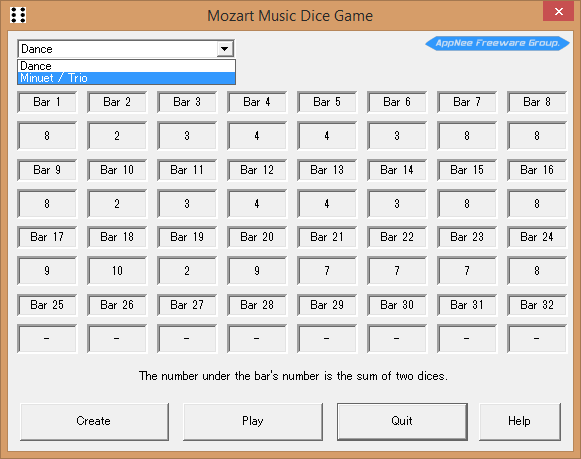