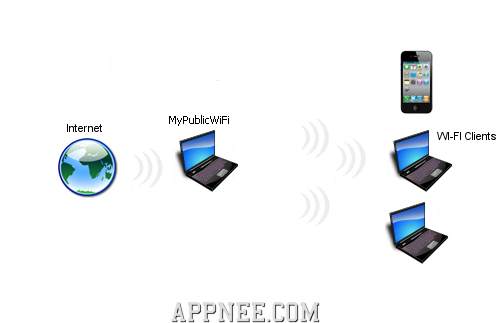 More and more families are equipped with a wireless router, in which case mobile phones, computers, handheld game consoles can connect to Internet through Wi-Fi connections. But when away from home, these mobile devices became decoration.

MyPublicWiFi is able to turn your laptop or PC with Internet connection and a WLAN card into a Wi-Fi wireless access point (or called wireless router). That means by sharing the password, any surrounding mobile devices with WiFi support can share this wireless network connection, so as to realize the free and super fast Internet surfing. In addition, MyPublicWiFi also comes with Firewall and URL Tracking functions, which can be used to filter, limit P2P, BT download connections, or record and track all the connected users’ Internet connection history (accessed web addresses). After repeatedly testing up to 20 similar Wi-Fi sharing software (including the popular and commercial Connectify), most of them are unable to successfully or smoothly create a WiFi hotspot, some are able to create but can’t be scanned, or even connected but just unable to surf the Internet normally. What’s more, many of them need to manually modify the network adapter settings and restart computer… All of this really always makes a user have to give up the ideas of sharing network connections.

And after actual countless use and test in the past more than 300 days, finally I can make sure that for now, among all similar tools I have known, MyPublicWiFi is the only truly effective, efficient and easiest-to-use (just fill in your SSID name, access password and choose which network connection you want to share. Or just use all the defaults instead), lightweight virtual WiFi Access Point generator on Windows for any kind of laptop/PC with a WLAN card. 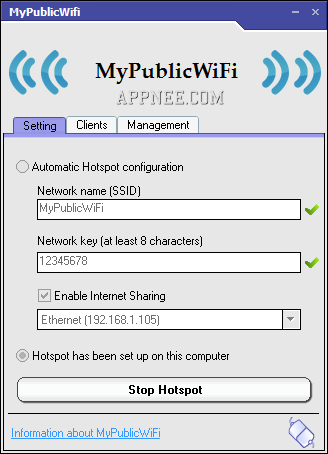