The popularity of legitimate video services such as Netflix, Amazon Prime Video and Hulu has reduced consumer’s demand for BitTorrent protocol based file-sharing services. Of course, the BitTorrent community finally fought back, and BitTorrent based streaming media apps like WebTorrent and Popcorn Time began to fight. Their main feature is that they allow users to play video files directly from BT seed file without having to download the entire video file first, for free.

Popcorn Time is essentially an open-source, cross-platform BitTorrent client that contains an integrated media player and has access to the API of YTS (AKA: YIFY Torrents), originally developed by Federico Abad (leader from Argentina), Matias Fork, and a bunch of geeks from all over the world. Its original intention of design is very simple: builds a free version of Netflix. That way, we don’t have to spend a lot of time and energy on the Internet struggling to find various film sources.

Popcorn Time uses the torrent tracking service provided by YTS to stream high-definition video files, and uses OpenSubtitles to provide add-on subtitles in different languages. It employs the sequential downloading method to obtain the video file listed by multiple torrent tracking websites, also allows user to manually add other BitTorrent trackers. Even better, its update speed of video sources and video playback speed are extremely fast. It is no exaggeration that we can now smoothly watch the latest movies and TV shows on any device, anytime, anywhere with help of Popcorn Time.

Popcorn Time is able to intelligently determine and select excellent seed files from the Internet. When a user watches the movie, it automatically loads the seed file and performs a cached playback to the movie file. The design of the main user interface is pretty clean and professional, and the entire program has no ads. The left panel provides a search bar and movie genres category, and you can check the health status of movie seeds and other relevant data while viewing the movie information on the right panel.

As a Netflix-inspired and BitTorrent-based streaming media application that runs on all platforms, Popcorn Time is much better than WebTorrent in many respects. At least, you don’t have to find the movie/TV program seeds everywhere by yourself anymore. Instead, just fire up this software and start watching movies right away, like watching them on YouTube, Netflix and other streaming media websites. It is so popular that it has been translated into dozens of languages in a very short time and spread rapidly around the world.

Popcorn Time’s original developers were pressured by the MPAA (Motion Picture Association of America) and removed the software download links in 2014. But in order to avoid legal actions and protect their work, they finally uploaded Popcorn Time to GitHub and made its source code open. That means it will be very hard for international copyright agencies such as MPAA to nip it in the bud. Since then, it has been taken down and rebuilt many times, but still keeps going and develops new functions. As to whether it is illegal to use Popcorn Time? It only depends on the laws and policies of your country, has nothing to do with the country where the software developers live in or any film companies are based in. 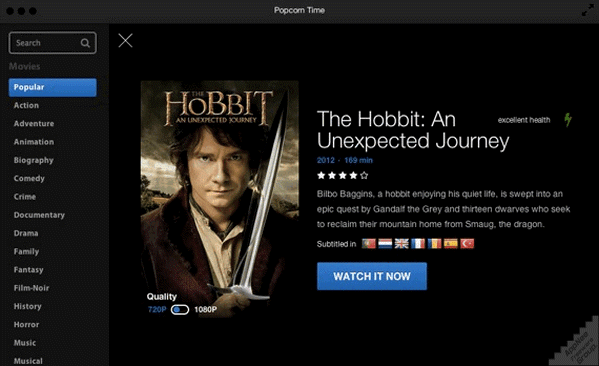