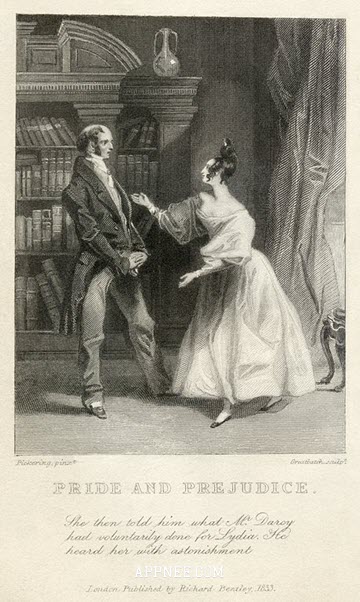 Pride and Prejudice (formerly known as First Impressions) is a representative work of the famous British writer Jane Austen (also the first work completed by her and published in 1813). As a classic full-length novel describing the love and marriage, it vividly reflects the British town life and social customs under the conservative and closed state in the late 19th century and early 20th century.

Based on the love imbroglio between the hero and heroine arising from their pride and prejudice, Pride and Prejudice writes a total of four marriages representing different concept/extreme. They fully express the author’s view on love and marriage – emphasizes the influence of the economic interests to people in love and marriage. Pride and Prejudice has dramatic plot and lively & interesting words, and is one of the most popular works of Austin’s novels. It have been adapted into movies and TV series many times, and was rated as one of the greatest love stories around the world.

Jane Austen has meticulous observation and colorful emotion. At the same time, her sense of humor makes her observation become more pertinent and powerful, as well makes her feelings full of vitality. All of this was reflected in many of her novel works.