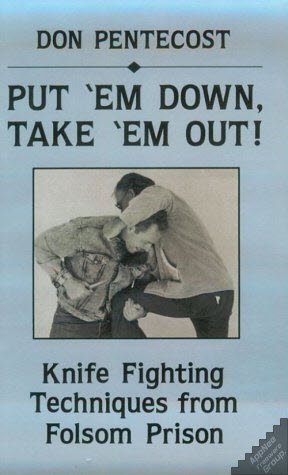 Folsom State Prison is one of the safest, most guarded and most dangerous heavyweight prisons in the suburb of Sacramento, USA. Here, prisoners use a deadly weapon (dagger) rather than fists at the time of combat, without exception. As a result, the knife fighting techniques developed here are far beyond any levels you can meet on the street. Because the situations that these knife fighting skills are about to deal with are much more dangerous than any so-called dangerous situations you met in the street fighting.

You may think, through books, magazines, and/or martial arts training, you have fully understood the theory of short sword fighting. Whereas, unless you really participate in a short sword fighting, otherwise all you know is just some theory without any actual effect. All the dagger fighting skills putted in Put ‘Em Down, Take ‘Em Out! are extracted and purified from actual combats. The biggest role of this book is to break all your illusions to knife fighting in the past, which can save your life at a crucial time in the future.

The author got rid of those gaudy skills that do not work in the life and death struggle in our real world. All combat skills mentioned in this book are simple and direct, which is just necessary for knife attack and defense in reality. Put ‘Em Down, Take ‘Em Out! will make you really realize the immeasurably vast difference between knife fighting fantasy and actual combat. It has no so-called “important” chapters. Because the content contained in each sentence in this book is likely to result in your life or death.

Most of the existing “knife combat experts” are just a writer rather than a warrior, or in other words, they only fight or be a master on the paper. However, in Put ‘Em Down, Take ‘Em Out!, your trainer is a guy who personally participated in numerous actual combats when he was inside prisons and came back alive. He will help you calmly face the most deadly threats you may encounter on the street.