River City Ransom: Underground (RCRU for short) is a multiplayer (both LAN and WAN) action RPG with free exploration gameplay that produced and published by Conatus Creative from Canada. It comes with 100+ pure hand-painted game scenarios (levels), 8 heroes with unique skills, open game world that allows to freely explore, where you can upgrade skills, shop, and fight. In no time, you will find that the difficulty of this game is much higher than the classic River City Ransom of the year.

Technōs’s popular Kunio-kun (熱血) series of video games, such as Nekketsu Kōha Kunio-kun (熱血硬派), Downtown Nekketsu Monogatari (熱血物語, River City Ransom), Nekketsu Kakutō Densetsu (熱血格闘伝説, Nekketsu Fighting Legend), Nekketsu Kōkō Dodgeball Bu (熱血躲避球), Nekketsu! Street Basket: Ganbare Dunk Heroes (熱血籃球), and Nekketsu Kōkō Dodgeball Bu: Soccer Hen (熱血足球), must be familiar to us. Relying on unique gameplay and excellent design, they received the recognition from players around the world. But later Technōs went bankrupt because of bad management, and sold the copyright of all its games to Arc System Works. In which, it includes the famous and successful Double Dragon series and Kunio-kun series. The Double Dragon series’ orthodox sequel Double Dragon IV with poor quality that independently developed and published by Arc System Works suffered a crushing defeat. However, River City Ransom: Underground, authorized by it and developed by Conatus Creative from, gives a big surprise to many old players who like River City Ransom. Because it really did it like this: kees the original taste and flavour, and carries forward.

Although it follows the art style of last work, but River City Ransom: Underground does very well on details processing. This is mainly reflected in the design of extremely rich and fine game scenes. And each scenario can show enough characteristics or funny elements. In addition, compared with the last work, the range of activity in this one is extended greatly. That’s, players can go almost anywhere. Sometimes, in order to move quickly on the map, you have to go to the subway station to take the subway. 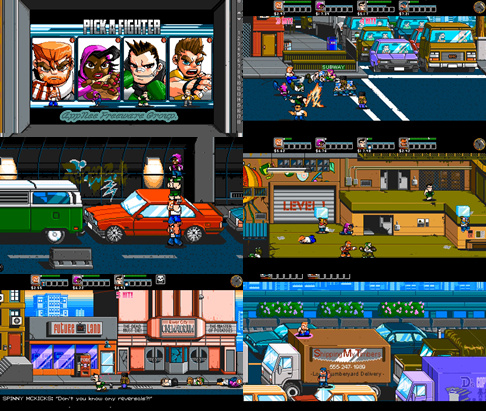