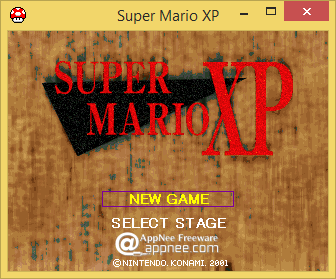 Super Mario XP is a nice and tricky homebrew game of Super Mario from Japan, with richer content: provides two different types of weapons; eight items with different functions; 16 kinds of enemies and ten BOSSes close at the end. All of which let you experience the endless charm of classic games again!

Due to the resolution limit of Super Mario XP, the size of game window is restricted (320*240), but its level design is abundant and has a complete game flow, especially combined with the classic elements from Super Mario Bros. and Castlevania. The protagonist in this game is still the Mario, but its body keeps in a constant state, cancels the normal mode – capable of becoming bigger, uses the HP (Hit Points or Health Points) system instead. Meanwhile, Super Mario XP introduces the weapon system of Castlevania. In addition, there is no lack of hidden elements in the game, such as green mushrooms, hidden areas in pipes and some branch lines.

Super Mario XP adopts the familiar classic background music from Castlevania, this makes players find the feeling of Castlevania in the game while experiencing the fun of Super Mario.