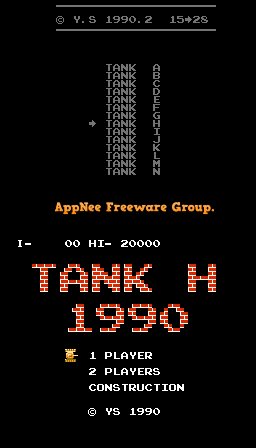 Namco‘s Battle City is one of the most classic video games on FC console. When I was in primary school, I played an “enhanced edition” (added with boat, gun, weeding and other functional props) of Battle City at my classmates’ home during a summer holiday. This game has always been unforgettable for me. Fortunately, I thought of it again recently and finally searched and found it. So, here I will share it with all fans players of Battle City via AppNee.

TANK 1990 (AKA: 烟山90坦克，坦克大战烟山版, FC Battle City Enhanced Edition) is a very popular modified/hacked/enhanced edition of the classic Battle City video game on FC/NES game console, made by YS from China in 1990. Its main features include: changed levels, changed props (take boat to sail on water, get gun to have super bullets, etc.), added a giant tank Boss at level 225 (whose prototype is based on the level 2 of Super Contra).

After entering the game, you will find it is divided into TANK A~N 14 versions. TANK A~G are the original versions (enemy tanks can not use props), TANK H~N are the modified versions (the initial state of your tank is 1-star, but enemy tanks can use props). Pressing ‘Select’ key on your gamepad can switch to the other 14 versions (the default is 15~28), and the tanks have different limitations in different versions.

BTW, the TANK D and TANK K versions don’t have boat and weeding props. And the known methods about how to get the weeding ability are: take two guns; take one gun + two stars. In short, if you want to revisit the classic Battle City video game on a computer, then this unofficial, homemade work is definitely the best choice.

The props are different from the original ones, and have different abilities.