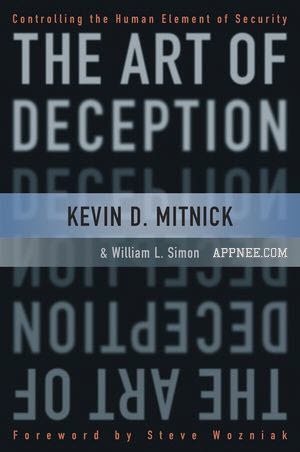 The Art of Deception is a bestseller about social engineering with nonprofit nature in 2002, written by the world famous hacker Kevin D. Mitnick who is also one of the headaches for FBI in the history (of course, after released from the federal prison in 2000 he became one of the world’s popular computer security experts).

In The Art of Deception, Kevin Mitnick will lead readers into the complex thinking of hackers. He described a large number of actual cheating scenarios, as well as social engineering attacks and consequences against enterprises. He focused on the human factor aspects relating to information security, explained why firewalls and encryption are not enough to prevent a smart attacker’s invasion to the database system of enterprise, also cannot prevent an angry employee to break down his company’s computer system. He illustrated: even for an information system with the most rigorous protection, in the face of a fraud artist determined, disguised as the IRS staff or other seemingly innocent roles, it will also become vulnerable. The Art of Deception proceeded from attackers and victims two aspects, analyzed the reason that each kind of attack was able to have its way, and how to prevent these attacks. It has very attractive narration, as well as a strong readability, as if it is a detective novel introduces real criminal cases.

Most importantly, to compensate his past crimes, in this book Mitnick provided a number of guidelines as references for enterprises when they are in the development of safety behavior rules, training plans and safety manuals, so as to ensure that the high-tech security protection invested and built by company is not useless. He relied on his own experience, put forward many suggestions to prevent security vulnerabilities, and hoped that people don’t forget to watch out for the most serious safety hazards – the human nature.