Similar with Easy Macro Recorder, TinyTask is a minimalist and tiny (33 KB) macro recording and playback tool. It’s used to automatically control the mouse and keyboard actions, so as to complete repeated computer operations.

TinyTask is capable of fully recording the whole operation process on the computer screen (including keyboard inputs and mouse clicks), and then automatically replay each action, in order to achieve the full-automatic mouse and keyboard control, making the system constantly repeat the operations you defined automatically at a later time. In addition, TinyTask supports customizable keyboard shortcuts operations, and allows you to compile and output the recording results to a EXE file for using them without TinyTask open. 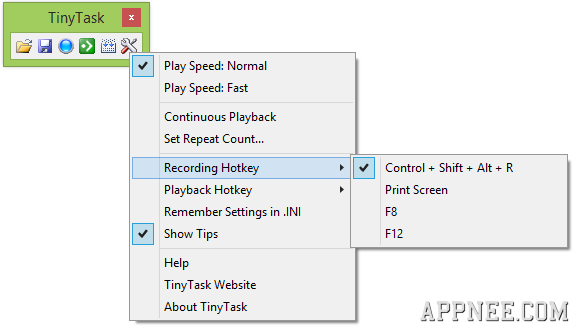