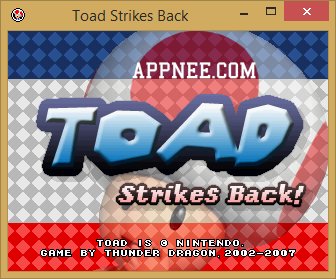 Toad Strikes Back (TSB for short) is an extremely excellent and successful fan-made small free game series with very high playability like big-budget productions. It was created by Thunder Dragon for fun and first released to public at MFGG (Mario Fan Games Galaxy) in 2007. Its followed sequel in 7 years later is Toadette Strikes!.

As a whole, Toad Strikes Back has really great gameplay and plot settings – the final goal is to stop the resurrection of King Koopa (Bowser). The game star was replaced with Toad, who is able to perform most of Mario’s old maneuvers, such as stomping, uprooting vegetables or picking up enemies, hurling fireballs, riding Yoshi, and even using the legendary hero’s hammer.

*** Drag the window border to zoom the display size

*** Shift and Ctrl can be adjusted by pressing Ctrl + Y

This is the Toad Strikes Back v1.0 Complete and Final version, will never update.