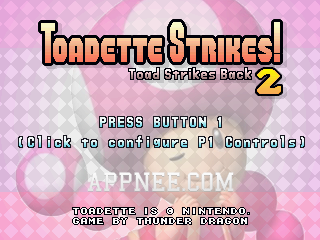 As sequel of Toad Strikes Back made by Thunder Dragon, Toadette Strikes! (AKA: Toad Strikes Back 2, TSB2 for short) was mainly inspired from the Super Mario Bros. 2. It was created using Multimedia Fusion 2 engine resources, along with numerous graphics & musical resources, finally finished and released in 2015.

In Toadette Strikes!, it changed its star from Toad to Toadette (????) – came on stage in Mario Kart: Double Dash!! taking the form of hidden role together with Toad at the earliest. Later, she began to be active in some rival type of Mario games. Also, TSB2 added a brand-new story and many new features, considered to be one of the best fan-made Mario-like games ever.

Toadette Strikes! has very similar gameplay to Toad Strikes Back, but also many notable differences, such as the customizable controls, five-point based health system, using Star Meter, 5 items, 7 worlds along with 4 hidden ones, etc.

This is the Toadette Strikes v3.0.256.34 Complete and Final version, will never update.