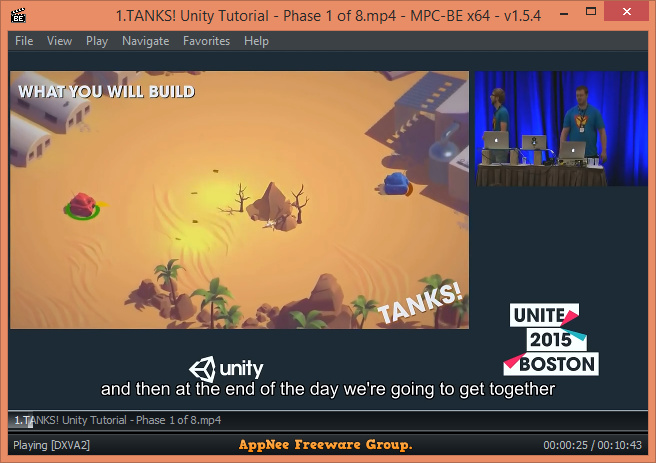 TANKS! can be considered as the only best, classic and complete video tutorial ever produced by Unity for absolute Unity game development beginners. This’s why AppNee only shared this tutorial to everyone rather than any other official video tutorial that also comes from Unity. After you finish this tutorial, you can not only continue to expand this game template, but also even develop your own Battle City-style small 3D games with ease.

This video tutorial consists of 8 phases, its total length is 4 hours 45 mins, was originally recorded at Unite 2015 Boston, and its trainers are Will Goldstone and James Bouckley. It will teach you how to create a two-player (on the same keyboard) tank shooter game using Unity game engine from scratch. You’ll also learn about simple game mechanics, integrating world and screen space UI, as well as game architecture and audio mixing.

TANKS! tutorial divides the entire making process of this game into eight phases, they are: Scene Setup, Tank Creation & Control, Camera Control, Tank Health, Shell Creation, Firing Shells, Game Managers, and Audio Mixing. Since Unity has prepared most of the scripts and prefabs for this game development, the main thing we need to pay more attention to is the framework structure and implementation ideas of the whole game.

Although this tutorial covers only a basic game case built on Unity for practice purposes, it does give a very good picture to the complete process of building any fully functional game. Its most important meaning is – to tell the beginners in game development: Do not worry too much about a lot of things in game development. Instead, as long as starting from where you stand, you will walk out into a wider and wider world step by step.