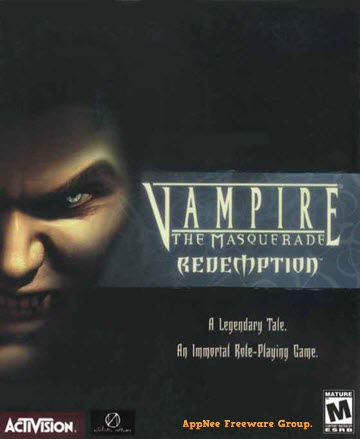 The huge influence of Diablo made many players forget a better action RPG game – Vampire: The Masquerade – Redemption, which was developed by a little-known small game company Nihilistic Software (now called nStigate Games) in 2000. It abandoned the way of representing a horror theme in the early 90s and adopted the game mode of Dungeons & Dragons. As a consequence, its release meant that horror game elements were eventually integrated into the role playing games.

The creativity and gameplay of Vampire: The Masquerade – Redemption originate from the very popular and unfading tabletop role-playing game developed by White Wolf Publishing (this kind of pen-and-paper RPG is actually the earliest online versus game). This vampire theme of game series contains the classic elements in all known vampire related games, comes with scenes design with more than 300 years of time span: From the Prague and Vienna in middle ages to modern London and New York City, all of which were designed referencing the cities in reality as models. Vampire: The Masquerade – Redemption used the excellent game engine of Nox (developed by Westwood Studios), which made the operation of this game become extremely simple. It’s similar to Diablo – using the Click Navigation system. But unlike Diablo, it has very exquisite 3D characters and graphics in Unreal Engine, supports arbitrary scaling and rotation of viewpoint, allows to customize shortcuts for controls, and supports multiplayer mode, where players can build a world of their own. Plus, the players are allowed to control up to four playable characters, each of which respectively has his/her own unique specific abilities and personality. In particular, every character comes with a wealth of attribute settings and an extremely rich background information that makes players have a very real feeling in game.