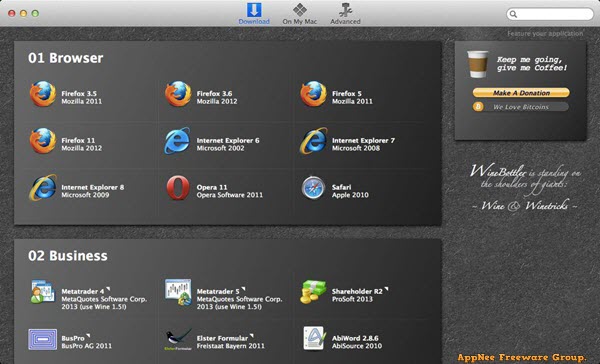 Users who are new to the Mac world from Windows often run into some nagging problems. For example, some software are only available on Windows; and some web pages must be opened using Microsoft Internet Explorer. For lazy computer users, it is not realistic to have them install an extra Windows OS or use a virtual machine such as Apple’s Boot Camp, VMware Fusion, VMware Workstation or VirtualBox to solve the problem. This case, you can give WineBottler a try.

WineBottler is a very practical and completely free tool that simulates the running environment of Windows programs on a Mac computer. It uses Wine to run the executable binaries on a Mac OS (by directly packaging Windows applications into native Mac apps), so as to enable user to directly install and run Windows applications on your Mac system without the hassle of installing a Windows/Mac dual OS or using a virtual machine. This way, we are able to directly use IE, Corel VideoStudio, NotePad++, and other popular Windows software on Mac, and conveniently and quickly customize and package any other Windows programs that can run on Mac.

The functions and operating mode of WineBottler are very similar to its predecessor Wine (free, open source) and the well-known CrossOver (a commercial variation based on Wine). By contrast, WineBottler’s GUI is much more user-friendly than Wine’s, and all installed software will be displayed on the Launchpad. Certainly, you can also use virtual machines such like Parallels Desktop, which are after all the most convenient and perfect cross-platform solution indeed (in particular, a virtual machine is impeccable in terms of compatibility). 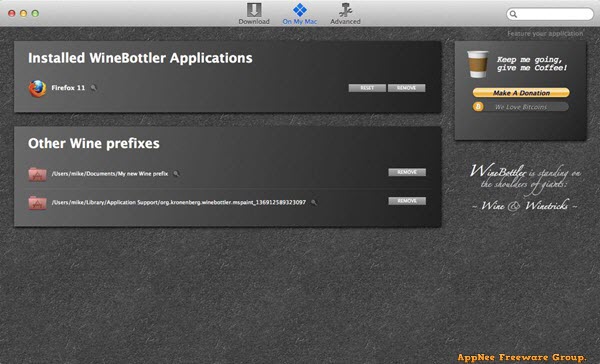 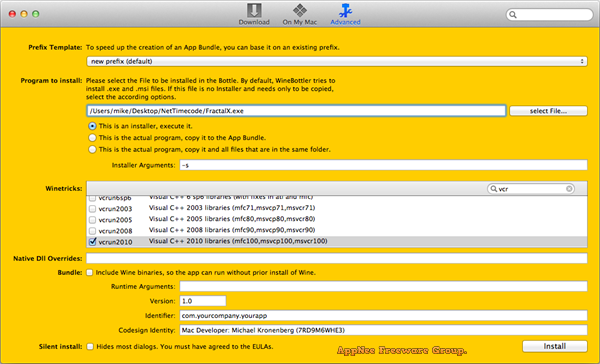