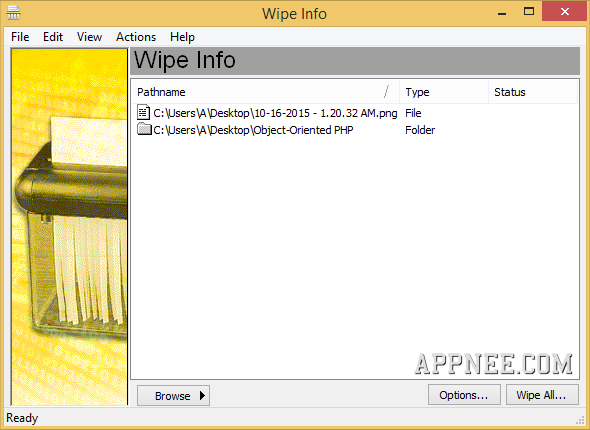 As we all know, the common way of deleting a file/folder is just to mark its directory entry or occupied cluster area. So the fact is all these so-called “deleted” files/folders are still lying there. And using the ancient DOS command ‘Undelete’ or Norton‘s Unerase command can be restored with ease.

If you have read the Kevin Mitnick‘s Ghost in the Wires and paid attention to this plot: he returned to his desk at the detective agency, in order to destroy all data on the disk before the FBI find it. Then you might have heard this tool Wipe Info for the first time. Its full name should be Norton Wipe Info, which could have been developed as a small auxiliary app in the Norton Utilities (supports ‘Fast Wipe’ and ‘Government Wipe’ two erasing modes, and allows to customize the detailed erasing settings like erasing times). It was specially designed to mark the data as “deleted”, at the same time, quickly and repeatedly wipe them several times. In that case, there isn’t any way to restore those “washed off” files or data on the hard drive.

AppNee wants you to realize two facts – first, this software has been very old (AppNee gave everyone its final version in early 2005); the second – it is still working and effective enough. Because the principle of erasing data/hard drive is not much else – just to overwrite those clusters occupied by the original data with meaningless 0 or 1! In addition, out of curiosity, you can try this: use some data recovery software to recover the data that has been erased with Wiper Info. Then you will find the only possible to be restored data/files would be named meaninglessly, they are generated by Wiper Info, such as: 1202.$$$.

From another angle, Wipe Info has a very good function for repairing the disk’s logistic bad tracks. Because after wiping all the data on a disk in bytes, it is sufficient to correct any read/write error in sectors. BTW, if you want to sell your old computer some day, do remember to use the kind of tool to make a full clean up. The power of people’s curiosity is unthinkable and uncontrollable. 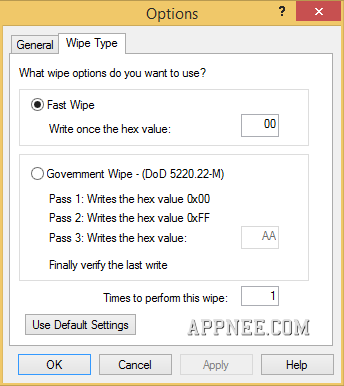