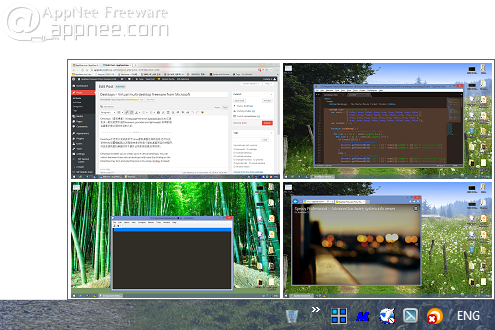 Desktops (virtual desktop) is one of practical freeware utilities of Sysinternals Suite released by Microsoft Windows, it’s lightweight, handy and portable,  so is very suitable for people who need multiple-window operations at the same time.

Desktops can not only complete the multi-window tasks just like the Linux virtual desktop technology, but will also display thumbnails of each desktop in the task bar in real time, thus helps quickly identify different programs running on every virtual desktop. In addition, Desktops runs without additional taking up system resources when using multiple virtual desktops, which is very nice, don’t worry.

Desktops enables you to create up to 4 virtual desktops. You can switch between these virtual desktops with ease (by clicking on the Desktops tray icon and selecting one or by using a hotkey instead). 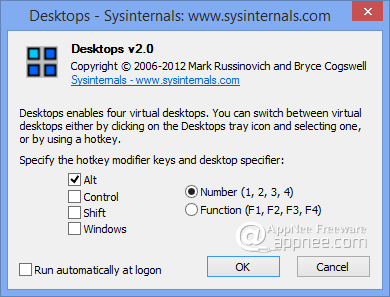 Desktops relies on the Windows desktop objects, which means there is no way to delete a desktop object, so Desktops does not provide a way to close a desktop, because that would result in orphaned windows and processes. Thereby, the recommended way to exit Desktops is to log out. Or just let it go, because it really not takes away much resources.