The Windows inbuilt Windows Media Player is at a loss what to do to all popular video formats and HD audio formats existing on the Internet. However, as long as you have Windows installed a codecs pack (i.e., all kinds of audio/video decoders), then Windows Media Player will instantly become a universal, all-around multimedia player. Of course, this solution same applies to other media players on Windows.

As the ancestor of audio and video decoders, also one of the few best codec packs, K-Lite Codec Pack has been world famous and well received for a long time. It integrates the vast majority of video and audio codecs on Internet in one place, so as to extend the compatibility of various media players to media files to an extreme, and enables them to decode/play many more audio and video formats than they could.

For many users around the world, K-Lite Codec Pack is definitely a must-have tool for playing videos with good reputation. It is able to load third-party subtitles, builds in the classic Media Player Classic player. In particular, compared with many 3rd party players except Windows Media Player that integrate some codecs, it can address user requirements in the field of video decoding in the most efficient and most direct way. In other words, with help of K-Lite Codec Pack, basically you can abandon any other third party video players and return back to Windows’ own native, pure, clean and fast WMP. 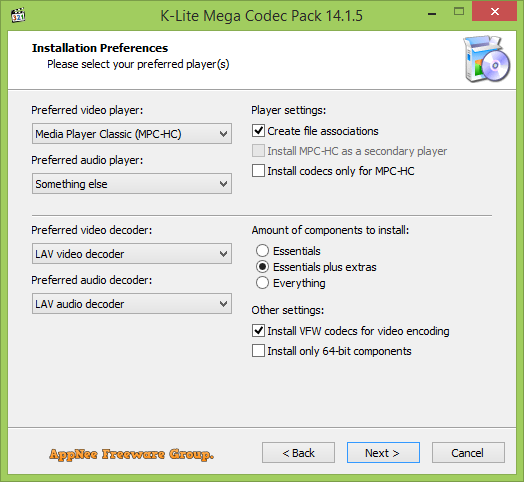 There are four variants of the K-Lite Codec Pack: