RGS-AvaCam is a freeware all-powerful camera capturing utility, which can automatically and regularly capture (photo and video) through webcam or any other video equipment connected to the computer, and save them to the specified folder.

RGS-AvaCam allows to capture manually according user’s need or automatically every other several seconds. The captured images or videos can be saved as JPG or BMP format in a customizable compression level, and support using the built-in image/video browser to view. In addition, RGS-AvaCam also enables users to replay the live video (full-screen browsing mode support) or save the recorded video as AVI format. What make me fondle it admiringly most are its motion detection feature as well as the burst capturing mode. That’s when it appears any motion of object within the camera’s visual range, RGS-AvaCam will be able to detect it and automatically starts to capture it as photo or record it as video. Therefore, to a certain extent we can take it as an efficient monitoring tool to use. 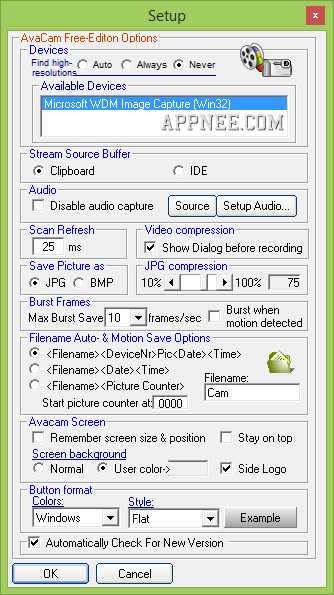