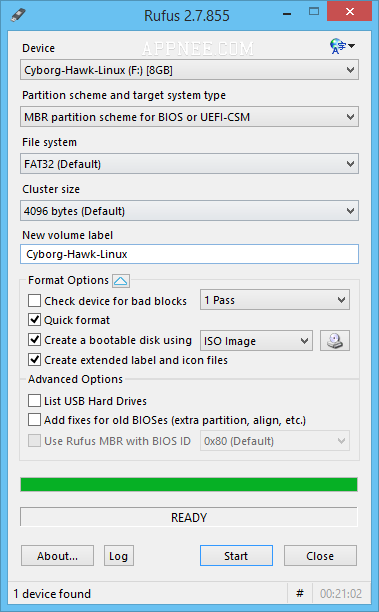 Rufus is a free and open-source bootable USB installer creating tool developed by Pete Batard from Ireland. The first thing that went through my mind when saw its name is the character Rufus Shinra in Final Fantasy VII. So what does it excel at, compared with the classical UNetbootin, powerful Universal USB Installer, reliable Windows USB/DVD Download Tool and fast Win32 Disk Imager?

No need to repeat the usage and purpose about such kind of UBS OS installer/maker (mainly used for OS installation or Live CD), here AppNee only talks about its several better places than other famous similar applications. First, Rufus has a smaller file size (less than 1 MB, AppNee calls any software with <1 MB file size to be “Tiny App“) and simple, friendly UI that lets a user feel amiable and familiar; Next, comprehensive features design (humanized “Partition scheme and target system type”, “File System”, “Cluster size”, “Volume Label” customizations, as well as the important “Format Options”) and faster formatting/creating speed; Comes with FreeDOS (although for the vast majority of users this seems to be useless – making a Linux Live CD at random will be much more helpful than DOS).

After making into a USB installer using Rufus or any other similar tools, your mobile storage devices can still be used to store files as usual!