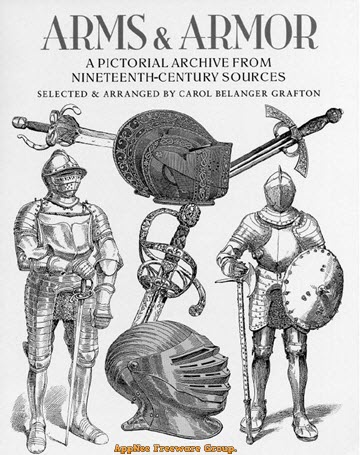 I myself am addicted to everything of the medieval Europe, including architectural style, people’s dress, diet, weapons used in that era, and so on. This period of time, I’m in preparation for beginning to study game design & development to realize the game world only exists in my mind, and was searching relevant information and resources. Then I was lucky enough to find this book (Arms and Armor: A Pictorial Archive from Nineteenth-Century Sources, formerly called: Ancient and Medieval Arms and Armor) on ancient European arms & armors. As usual, AppNee can not wait to share it out, for more enthusiasts who have the same needs.

Ancient and Medieval Arms and Armor is an atlas type of book on European ancient weapons and armors, of which the main materials were selected from the history information about 19th-century of Europe. It has more than 750 illustrations, which comprehensively and precisely reveal as many details as possible about the weapons and armors used in battles by people from place to place in medieval Europe for readers. The time span starts from BC, until the 18th century. The arrangement of the entire book generally gives priority to the corresponding time axis, and shows the typical weapons and equipment in multiple locations in every critical historical period for readers.

Ancient and Medieval Arms and Armor is very well made. Every picture for arm or armor was drawn in a subtle way, some of them also have pretty high art level. In short, this book is suitable for those enthusiasts, art lovers, games designers, film/television producers or directors and so on who have interests in European ancient arms & armors.