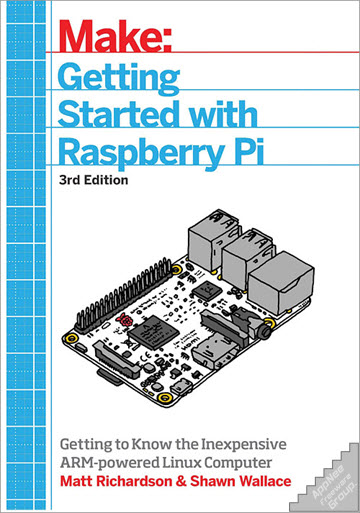 Raspberry Pi is a low-cost microcomputer well liked by makers around the world, comes with small volume (only the size of a credit card) and powerful functionality. For entry-level enthusiasts, behind Raspberry Pi, there are strong community support, rich resources, as well as experience share from fan users, which is very attractive.

Getting Started With Raspberry Pi introduces the basic knowledge of Raspberry Pi in simple but profound words (including the structure and configuration of software and hardware, and the use of inbuilt operating system), as well as the programming techniques for its underlying GPIO (General-purpose input/output) interface. In addition, this book enables you to quickly master all related programming skills (including the use of Arduino, Python, Linux, Scratch). For example: boot Linux system from Raspberry Pi; use Raspberry Pi along with Arduino to design electronic works that support remote control via network; learn Pygame multimedia programming; and use the pre-loaded Scratch graphical programming software to make a simple and small game.

For now, it has been the world controlled by the “embedded os”. As a consequence, 8-bit microcontroller has been slightly weak in the aspects of function and application, whereas the arrival of Raspberry Pi solved such problems perfectly. There is much technical data about Raspberry Pi on the Internet, but they are all so chaotic that beginners cannot start to learn systematically. The publication of Getting Started With Raspberry Pi brought great help to the vast electronics makers. This book has very strong practicability, and contains a large number of precious code examples. The fact is, it has been regarded as the preferred introductory book for everyone to begin to learn Raspberry Pi.