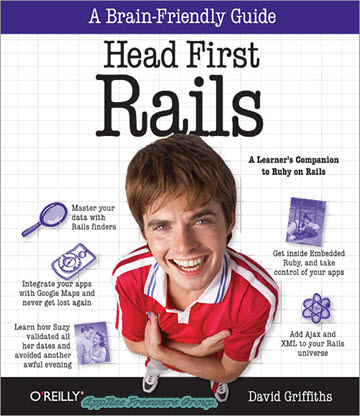 The Rails framework (formerly the MVC framework, AKA: Ruby on Rails) was put forward by David Heinemeier Hansson from Denmark for the first time in 2004. Different from any existing complex, ivory-towered Web development frameworks at that time, Rails is more in line with actual needs and more efficient. It combines the advantages of PHP system (rapid development) and Java system (structured programming). As a consequence, Rails received extensive attention in the industry not long after it was proposed.

Head First series is the most successful book series published by O’Reilly Media. It is award-winning and has been well received by countless readers since its debut. Head First series teaches the dull programming techniques from shallow to deep with abundant illustrations and exhaustive explanations, and is rare reference book for different levels of programmers to learn by themselves. Head First Rails (originally called: Head First Ruby on Rails) is another good book in the Head First series. Any beginners who are interested in developing interactive web applications with the Rails framework should not miss this book. 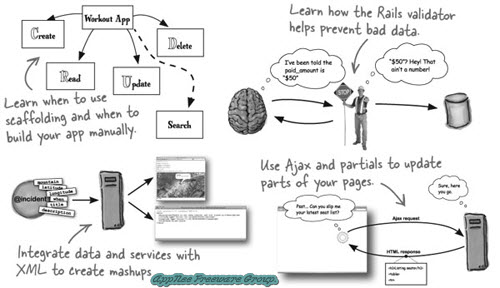 Before starting to read Head First Rails, AppNee thinks you should know something about this book. First, before you begin this book you need to install Ruby on Rails on your computer; Second, this is not a reference book; Third, the author does not fully explain every piece of code for you in this book; Forth, Head First Rails is a book about Rails, not a Ruby book; Fifth, You’d better have a certain basic knowledge for web development about HTML, PHP, AJAX, and so on, or you may feel a little confused; Finally, most examples of this book are based on the older version of Rails, and the fact is each generation of Rails has no backward compatibility. That means, you should study this book with flexibility.

In a word, Head First Rails meets the consistent style of Head First series (emphasizes composing in a special way, which consists of a large number of images and interesting content, thus reaches the effect of non-fatigue, immersive learning), comes with simple and clear knowledge explanation, and is pretty suitable for Rails programming beginners. BTW, if you’ve already read Agile Web Development with Rails, then you don’t have to read this book anymore.