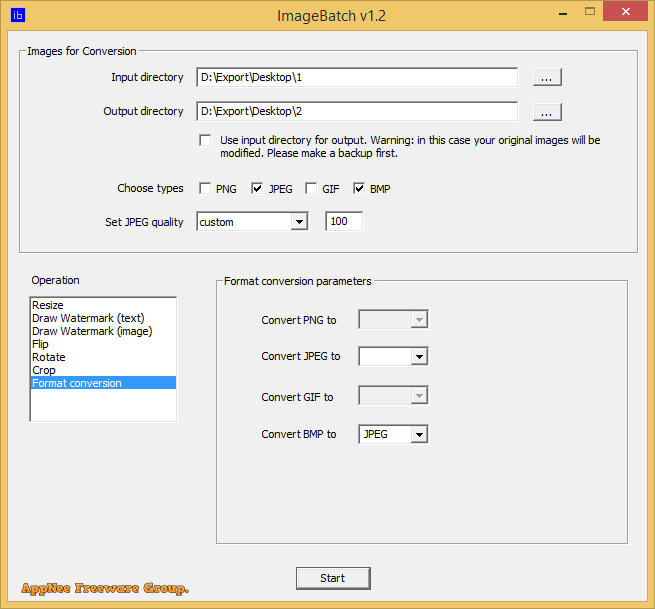 Recently, my camera broke down and I had to use my laptop’s low-end inbuilt camera to take photos (I haven’t had a smartphone yet, maybe I will buy one as soon as possible for the convenience of taking photos). Even worse, the image format used by ECap is BMP, which is extremely big in size. So I tried to convert it to PNG format with PNGGauntlet, but found that it would take dozens of hours at least to convert 356 BMP format of images to PNG format. This is really a bit joke!

As a result, it was immediately terminated. Then I suddenly realized that – converting BMP to PNG was a mistake! Because the best file format for storing photos is still JPG/JPEG (with minimal file size while maintaining the same quality) rather than others! Since there had never really been a demand like this before, I began to search for the image format batch conversion tool, then found several pieces of software and actually tested them one by one. The final decision was to immediately share ImageBatch to AppNee. The reason is simple, it not only allows user to set the quality of the format conversion, but also is very fast.

ImageBatch is a free, tiny and portable universal image converter for JPEG, PNG, GIF and BMP image formats on Windows, developed based on LibGD and EasyBMP (free, open-source, and cross-platform Windows BMP library). With ImageBatch, you can convert your images from one format to another, resize, crop, rotate, flip them, and draw text or image watermarks on them – importantly, all actions can be finished in batch.

ImageBatch is very easy to use: you just need to choose the working directories (source folder and destination folder) and supported image types, setup image quality, operation along with parameters, then press “Start”. In the execution process, it can be stopped as you like by using “Stop” button at any time.