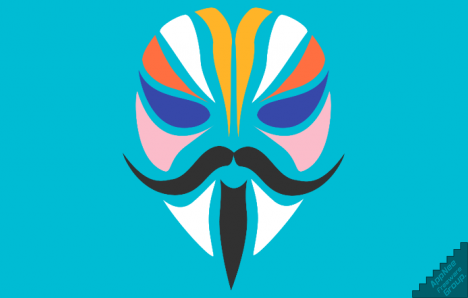 Root refers to the technology that allows user to obtain the Superuser permissions for Android operating system. Root enables user to bypass all kinds of limitations made by the phone’s manufacturers, to uninstall the numerous, useless apps that are pre-installed on the phone, and to run some applications that require superuser privileges.

Then, in order to increase security, Google introduced the SafetyNet Test to ensure the safe operation of some banking apps such as Google Pay. This means that Android players have to choose between root privileges and some valuable apps. At this point, Magisk was born – it implemented a way to bypass the SafetyNet to perform root operation.

Magisk (AKA: Magisk Manager, short for Magic Mask) is a suite of free and open-source tools for customizing Android OS systemlessly, developed by John Wu (topjohnwu) from Taiwan in China. As an Android framework, also a universal third-party systemless interface, it can achieve the effect of modifying the “/system” in a manner of not touching the “/system” virtually. It supports ROOT Android devices, Magisk modules installation, mobile privileges management, modifying boot image or adding files to “/data” and “/cache” directories, etc., and is a must-have tool for Android device enthusiasts.

Magisk works by keeping the system partition unchanged and modifying the boot partition. Its function is very similar to the long-established and popular Xposed framework, but they are implemented in different ways. Moreover, Magisk has never thought of going to replace Xposed. Instead, the two are compatible with each other. For example, user can install Xposed via Magisk. Before, Magisk had very few modules and was not easy to use enough. But after version 14, when Magisk Manager began to support direct installation without the need of Recovery for flashing it into phone, its entry threshold was lowered to the easy-to-use level. At present, Magisk framework already has hundreds of modules.

In addition, Magisk also has some built-in features, for example: Root device + hide Magisk itself. As we all know, most banking apps can automatically detect whether a smartphone is rooted or not. Once the phone is rooted, apps of this kind cannot be used. So the feature of hiding Magisk itself allows user to get the root privilege while still using these banking apps. As for the support for rooting, it’s even easier. Usually you need to flash the TWRP or CWM Recovery package into Android device and then install SuperSU to get the root privilege; While with Magisk, you just need to install it to get the root permission. Even better, it comes with MagiskSU, and supports fingerprint recognition permission request.

The implementation principle that Magisk uses to bypass the SafetyNet to use root is: it creates hooks/intercepts in the boot partition when the system starts up, and mounts “/data/magisk.img” as “/magisk”, thus building a file system that can be customized to replace, add and delete on the basis of system. As a result, all operations are done at startup without actually modifying the “/system” partition (that is so-called systemless interface – modifying “/system” without touching it). 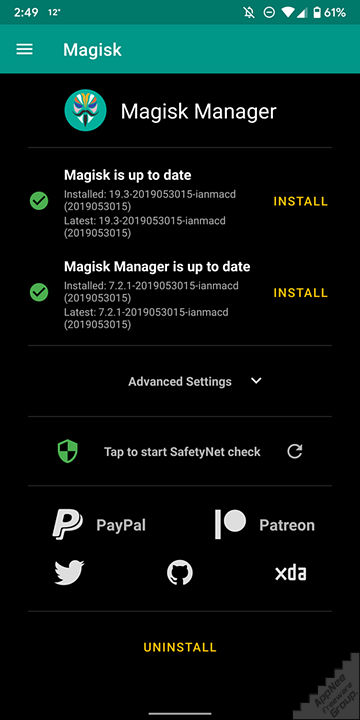 Remember that devices that are not “certified” by Google will not be able to download and install Netflix, Google Pay, Pokémon Go and other apps from the Google Play app store, nor will they work properly on devices that are already rooted. Besides, ROMs that have changed the system files cannot be properly updated through the official OEM channel of smartphone.

For a long time, customization and stability seemed to be “fish and bear paw” for the Android ecosystem – until Magisk came along. The working mechanism of both Magisk and Xposed is “intercepting”. Xposed loads the customized functions by hijacking the Zygote process on Android. It’s like a halfway kill, forcibly adding the custom content we need into the system process before the application runs. While Magisk found another way – it loads custom content by mounting a file system separate from the system partition, where all changes take place.

Obviously Magisk is implemented in a more advanced way. When the mounted Magisk partition is hidden or even unmounted, the integrity of the original system partition remains intact. As a result, there is no problem playing games that require root validation, running applications that require device authentication status, or even performing OTA updates that require system integrity validation.

The Magisk file system is better than any previous system frameworks in terms of stability, thanks to its clever avoidance of direct modifications to system files, which is why it is now widely recognized and praised. In a word, compared with Xposed, Magisk not only outfights it in terms of functionality, but also comes with better stability and ease of use.

The first thing many people know about Magisk is probably about root. After SuperSU disappeared from the scene, it naturally became the dominant way for most Android communities to get root access at present. But Magisk’s special operating mechanism also give it a capability that makes it unique to other customizable tools on the Android platform – systemless. This systemless quality gives Magisk many advantages in addition to getting the root access.

On the one hand, thanks to the unique mounting mechanism, we can hide the root privilege with a focused goal when using Magisk, or even temporarily hide Magisk itself. As a result, not only is it possible to use specific applications in root mode, but also to perform the seamless OTA updates, which were absolutely impossible before and are no longer far off now. In the Magisk Manager app’s settings, we can even reinstall Magisk with a random package name, making it disappear under the nose of other apps – what a brilliant trick this is!

On the other hand, the existence of the mounting system gives Magisk a diverse modular ecosystem. Now that it is utilizing a kind of cheating implementation approach, it might as well mount a few extra things: fonts, sound effects, drivers,…, even the Xposed framework. Magisk provides a sandbox that is independent of the system partition and can be invisible at any time, so that we should not lock its talent into just the root thing. In Magisk’s modules warehouse, we can find a wide variety of modules to meet our various customization needs. With these modules, there’s a lot more things we can do after rooting. 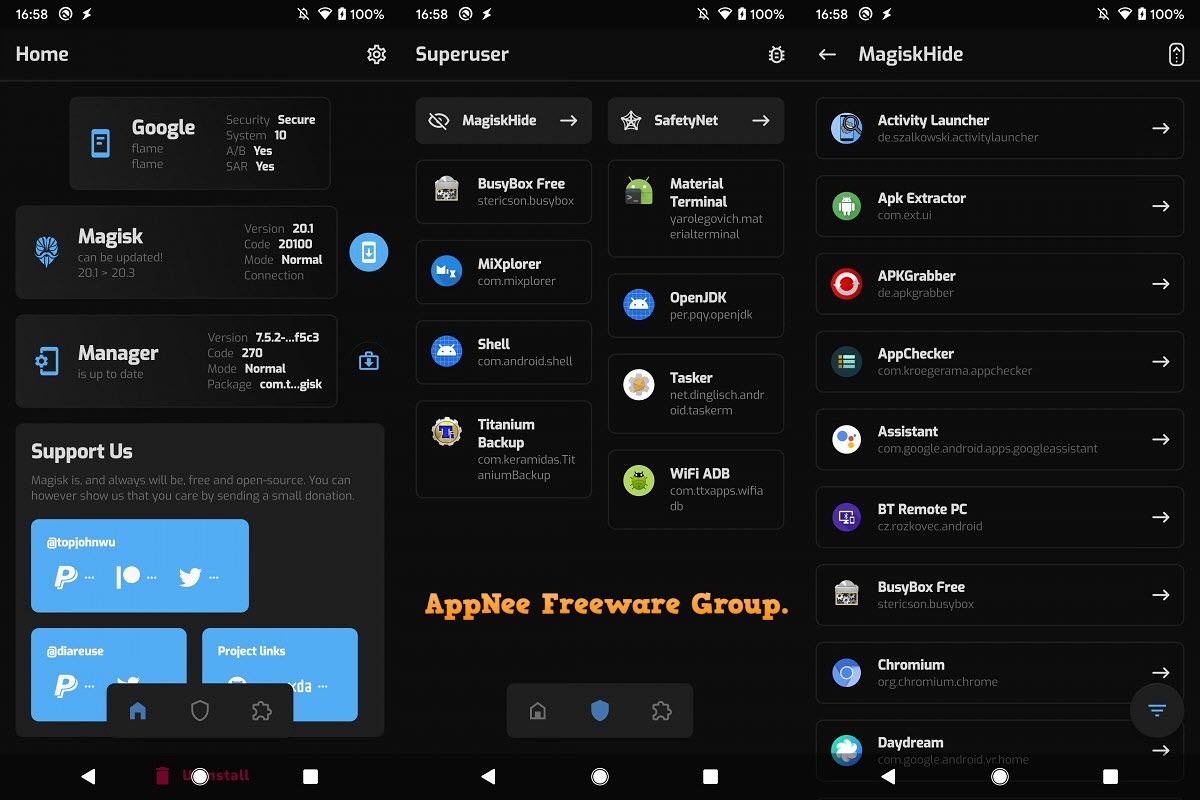