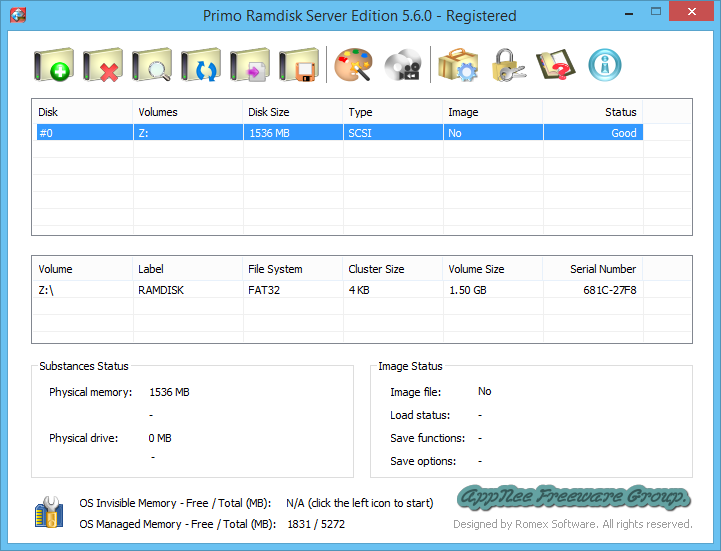 First of all, AppNee wants everyone to know three facts about RAM:

Therefore, we can use some Ramdisk (AKA: RAM drive) software to drain the idle memory capacity, in order to improve the system performance crazily – play to their extreme.

Primo Ramdisk (AKA: VSuite Ramdisk II) is the successor of VSuite Ramdisk with more features, better performance, and friendlier UI. It is currently acknowledged as the most powerful (very reliable), five-star Ramdisk tool. As the outstanding and leading one among all Ramdisk software, Primo Ramdisk is much better than all the other similar tools. By contrast, for example, Buffalo Ramdisk generates huge size of log files in C volume, QSOFT Ramdisk comes with too complicated settings, even the most popular SuperSpeed’s RamDisk Plus (as follows). 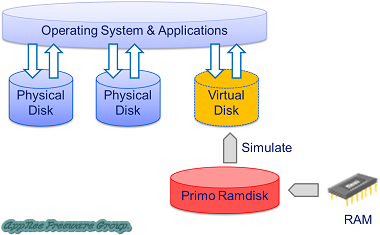 By virtue of unique algorithm, Primo Ramdisk can turn part of physical memory into a physical/virtual hard disk partition that is even N times faster than any SSD. It’s enough to overcome the bottleneck problem of hard drive speed that can never be solved, so as to significantly increase computer performance (Because the running speed of system depends largely on the hard disk read/write speed. That is why even if your RAM is larger, it’s still impossible to further improve the OS performance). In addition, Primo Ramdisk’s unique way of memory management allows to write the data on virtual disk to hard disk at the time of Windows shutdown, and automatically load it back to Ramdisk when it boots up.

From another viewpoint, when all data to be read frequently (such as the temp, cache, download folder of system or software) is deposited into the Ramdisk, it can effectively extend the service life of both HDD and SSD. BTW, don’t make the mistake of thinking that a computer with high configuration (for instance, SSD + 8 GB RAM) does not need a Ramdisk at all. Because in this case, the enhancement on performance mainly embodies in the time of running some large software. Its performance boost is not comparable for SSD (you can test the speed of downloading the same file to Ramdisk, SSD and HDD. After that, I guess you may give up the purchase plan of SSD).

Block the program with your firewall (i.e.: stop it connecting to Internet). Otherwise, the following error may occur:

*** For now, we have no way to crack for the kernel driver.